A team of artists under the Beyond Earth collective had recently launched various crafts with unique designs as high as the stratosphere level of the sky. The launch was conducted as a test and was part of a bigger flight examination. 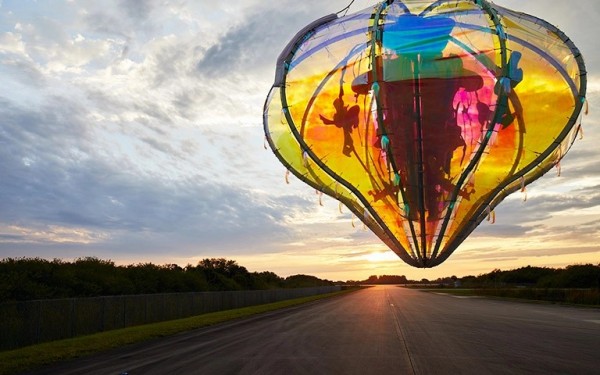 Beyond Earth is an art collective that expresses the fusion between the expressions of human artistry and astronomical studies. The recent test that included jellyfish aircraft was part of the project's special research called the 'Living Light.' According to a report by the collective, the project is an attempt to fuse various scientific fields, including Aerospace technology, biological and artificial intelligence studies. Moreover, the Living Light project is an expression of defining the boundaries between our blue planet and the limitless void of outer space.

Last June, the experts of Beyond Earth were successful in elevating the unique artworks for a whopping 30.5 kilometers above the planet's surface. Thie recent project, called 'Neptune One,' was among the initial attempts of the art collective to fly the vessels upon the farthest reach of the sky. The distance measured from the project made the jellyfish-like crafts reach the stratosphere.

Beyond Earth co-founder and space art, expert, and Supercollider gallery director Richelle Gribble said in a Space report that the main goal of sending artworks to space is to allow individuals to reconsider their thoughts regarding the limits of creative expression. The space artist added that when this creativity surpasses the Earth and reaches the oddities of the untapped void, we are pushed to rethink what space art is, how it can be constructed, and what possibilities lie beneath it.

Beyond Earth's inaugural Neptune One test flight is among the first few steps that introduce the possibility of space commercialization. It is also a major effort to bring customers aboard space flights in the future. Neptune One, surprisingly was inspired by the space art exhibition of Living Light. The project was the first largest art installation to reach the stratosphere and is expected to reach outer space in the future. At the same time, it would be a capsule that will have the capacity to transport astronomy experts to their missions.

Jellyfish Space Crafts is the Future of Commerical Space Flights

Jellyfish was the intended inspiration behind the overall design of Living Light capsules. The reason for the jellyfish structure is for Beyond Earth to represent and amplify the biodiversity of the living organisms on the planet. The experts emphasized that jellyfish design was chosen specifically to express the hidden and undiscovered biological bodies under the deepest regions of the ocean, which are commonly overlooked in the story of life on Earth.

Gribble manages the project with artists, including Ars Electronica Futurelab's biology and chemistry art expert Yoko Shimizu and BioBAT Art Space gallery founder and curator Elena Soterakis. The testing of Living Light was a Beyond Earth project which was supported by collaborators from Space Perspective. Among the future research that the team will conduct will be focused on improving the structure of the capsules for ocean landing and zero-waste efficiency.