The BepiColombo spacecraft, which completed its first flyby of Mercury in early October, has given us the gift of hearing Mercury for the first time. Engineers used BepiColombo's data to transform the audio connection with the spacecraft into a sonification. Engineers from the Japanese Aerospace Exploration Agency (JAXA) and the European Space Agency (ESA) collaborated on the project, the first step toward researching our solar system's first planet. 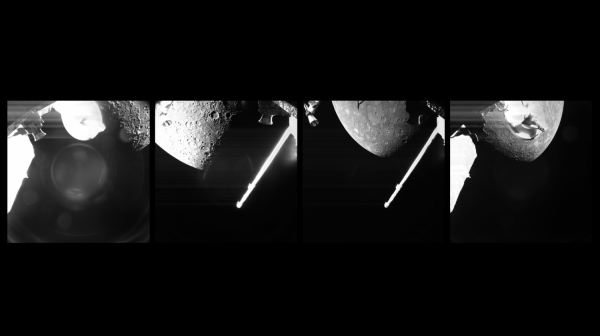 (Photo : ESA)
Some of the first images acquired of Mercury by the ESA/JAXA BepiColombo spacecraft during its first Mercury flyby on 1 October 2021. The images were captured by the Monitoring Cameras, which provide black-and-white snapshots in 1024 x 1024 pixel resolution.

BepiColombo's First Sound From the Closest Planet to the Sun

According to the ESA's report, engineers have translated the audio from the data gathered by the BepiColombo spacecraft during its October 2 flyby. The space agency said the sonification of data from Mercury Planetary Orbiter recorded the shifting intensity of the magnetic field and solar wind that Mercury is subjected to. The planet made these noises as the spacecraft passed through Mercury's very turbulent border zone between the solar wind and the planet's magnetosphere.

🔊 Hear the sound of @esa's @BepiColombo flying by #Mercury! 🛰️ Well, actually these aren't acoustic waves, but spacecraft vibrations captured by the #ISA instrument onboard the Mercury Planetary Orbiter and sonified to create this awesome video😍@ESA_Bepi @bepit_outreach pic.twitter.com/qJIaa54LUK

"On the acceleration plots that were appearing on our screens, we could see the tidal effects of Mercury on the BepiColombo structure, the drop of the solar radiation pressure during the transit in the shadow of the planet, and the movement of the centre of mass of the spacecraft due to flexing of the large solar arrays," Carmelo Magnafico of the Italian National Institute for Astrophysics said in ESA's statement.

The spacecraft's latest flyby was only the first of six planned flybys in the following months. According to the ESA, the spaceship reached Mercury after safely passing Venus on August 10 and will make nine flybys between now and 2025.

BepiColombo Takes Photo Of Mercury, Was The Atmosphere Thickening?

With the aid of its black-and-white navigation camera Mercury Transfer Module Monitoring Camera 2, BepiColombo endured the planet's gravitation from an altitude of barely 199 kilometers. Earlier this month, Science Times said the spacecraft captured spectacular photos of the planet's crater.

However, Syfy Wire said NASA's MESSENGER mission witnessed Mercury's atmosphere abruptly rise in brightness on three distinct occasions, sometimes by as much as 20 times, according to a team of planetary scientists.

The quantity of calcium in Mercury's exosphere is around 20 kg, Syfy Wire added. Even so, it's enough to give out a weak UV light, as detected by MESSENGER on many occasions. The density of the exosphere rises and falls throughout time, typically following Mercury's seasons - the planet's orbit is quite elliptical, so it's in a better position to get struck by the solar wind at times. For a few weeks, the density of the exosphere increases twice each 88-day orbit. Even then, it's hardly noticeable.

Meteoroid collision is the suspect for this. The cometary material that contributes to the formation of the exosphere is very tiny, like microscopic grains of dust. However, the magnitude of these effects must have been far greater. Two of them were from impactors that were probably 10 centimeters across (about the size of a softball or grapefruit) and the largest was approximately 16 centimeters across (around the size of a volleyball), assuming they were rocky in composition. It's impossible to say if the debris came from tiny asteroids or comets.

The impact speeds are unknown, but a Mercury collision would be over 30 kilometers per second - over 100,000 kilometers per hour! Because Mercury is so close to the Sun, things that approach it are propelled to higher speeds by the Sun's gravity; normal Earth-impacting objects "only" move at 20 km/sec.