A new study finding recently showed that as much as 90 percent of tuberculosis bacteria released from an infected individual might be carried in droplets, also known as aerosols, expelled when one breathes out deeply.

The New York Times reported that the research was presented earlier today at a scientific conference online.

The said news site also specified that the said findings had overturned the conventional knowledge about the transmission's main route.

Specifically, upending hundreds of years of medical belief, a team of researchers from South Africa has discovered that breathing may greatly contribute to TB transmission compared to the signature symptom, which is coughing. 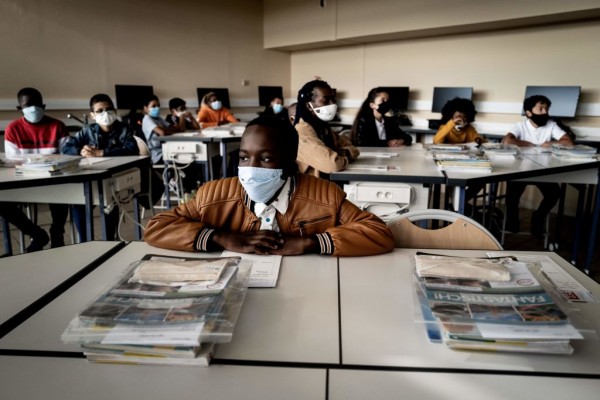 (Photo : JEFF PACHOUD/AFP via Getty Images)
Research finding may help explain the reason tightly packed indoor spaces such as prisons among others frequently, are breeding grounds for tuberculosis, as they are for COVID-19.

This report echoes an essential finding of the COVID-19 pandemic. More so, coronavirus is spreading in aerosols carried aloft, specifically in indoor spaces, a transmission route that was commonly underappreciated as the pandemic started to unfold.

Last week, a report published by the World Health Organization indicated TB is caused by Mycobacterium tuberculosis, a bacterium that typically attacks the lungs. It is the deadliest infectious disease next to COVID-19 that had claimed over 1.5 million lives a year ago, the first increase in 10 years.

In 2020, the COVID-19 pandemic disrupted access to health care and supply chains globally, and 5.8 million individuals were diagnosed with TB.

However, according to the WHO's approximation, 10 million people were infected. Out of these millions of affected individuals, many may unknowingly or innocently be spreading the infection to others.

A similar 365 News Channel report said that according to University of Cape Town graduate student Ryan Dinkele, who presented the research findings, their model would suggest that aerosol generation and TB generation can actually occur independently of the symptom.

Such a finding may help explain the reason tightly packed indoor spaces such as prisons, among others frequently, are breeding grounds for tuberculosis, as they are for COVID-19.

Furthermore, the research proposes that some of the models used for the transmission of coronavirus, masks, open doors and windows, as well as being outdoors as much as possible, are essential.

And the research suggests that some of the methods used to limit coronavirus transmission - masks, open windows or doors, and being outdoors as much as possible - are important in curbing TB.

Epidemiologist Dr. Robert Horsburgh from Boston University said those infected with TB look at COVID-19 and say the latter-mentioned infection is only a sped-up version of tuberculosis.

TB Spreads Faster by Breathing than by Coughing

The new study finding has not changed the understanding that a single cough has the ability to expel more Bacteria compared to a single breath.

However, if an infected individual breathes 22,000 a day, whereas coughing up to 500 times, then, coughing accounts for as infrequent as seven percent of the total microbes emitted by a TB-infected patient, explained Dinkele.

Meanwhile, on a crowded bus, or in the office or school, where people are sitting in confined spaces for hours, explained Mr. Dinkele, just simply breathing would add more infections to aerosols compared "than coughing would."

In so-called tidal breathing, breathing opens up small air sacs in the lungs. Then, exhalation is carrying the microbes from the lungs through aerosols.

Due to their tinier size, aerosols emitted by tidal breathing can remain afloat in the air for a longer time and travel further compared to droplets released from coughing.

As with COVID-19, some tuberculosis patients transmit the infection to many people, but some are infecting few people around them.

Related information about how COVID-19 is transmitted is shown on the WHO's YouTube video below:

Check out more news and information on COVID-19  and Medicine and Health in Science Times.