NASA Hubble Space Telescope Witnesses Death of a Star; Is This a Warning Sign?

Thanks to NASA's Hubble Space Telescope, astronomers have received an unparalleled, complete picture of the initial moments of a star's devastating destruction. Hubble's data might provide scientists with an early warning system for other stars on the verge of exploding when coupled with views of the dying star from space and ground-based observatories.

The supernova, designated SN 2020fqv, may be seen in the Virgo constellation's interacting Butterfly Galaxies. Although the star died millions of years ago, the supernova's light is only now reaching Earth.

According to scientists, everyone discussed supernova activity like they were crime scene detectives, arriving after the event to figure out what happened to that star. However, the study's authors emphasized that things have changed since then. They said in a Phys.org report that no one understands what's going on and that everyone is witnessing the death in real-time. 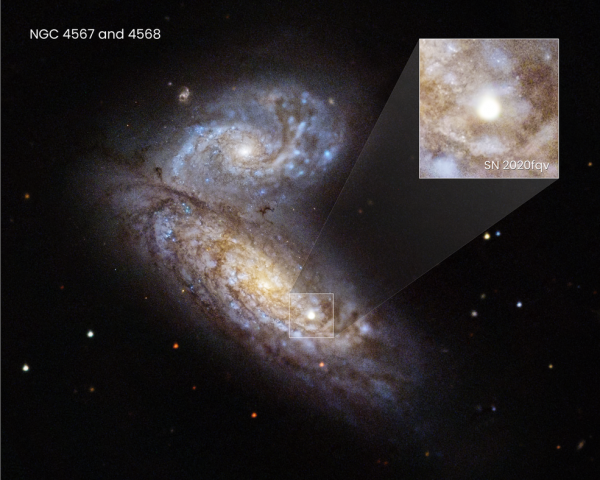 (Photo : NASA, ESA, Ryan Foley (UC Santa Cruz))
Astronomers recently witnessed supernova SN 2020fqv explode inside the interacting Butterfly galaxies, located about 60 million light-years away in the constellation Virgo. Researchers quickly trained NASA's Hubble Space Telescope on the aftermath. Along with other space- and ground-based telescopes, Hubble delivered a ringside seat to the first moments of the ill-fated star's demise, giving a comprehensive view of a supernova in the very earliest stage of exploding. Hubble probed the material very close to the supernova that was ejected by the star in the last year of its life. These observations allowed researchers to understand what was happening to the star just before it died, and may provide astronomers with an early warning system for other stars on the brink of death.

Astronomers detected the supernova was detected in April 2020 by astronomers using the Zwicky Transient Facility at the Palomar Observatory in San Diego, California. Aside from this, researchers revealed that the supernova was spotted by NASA's Transiting Exoplanet Survey Satellite (TESS). According to RemoNews, this spacecraft was designed to look for planets outside of our solar system. Still, it also studies stars and finds exoplanets.

Experts used NASA Hubble Space Telescope and other ground-based telescopes to view the supernova after their detection. These data were combined to give a full picture of the star's early stages of demise. Hubble, designed to view the supernova, found circumstellar debris near the fading star after the explosion.

🎟️ Get your ringside tickets ready!

Hubble witnessed the first moments of a star's death after a supernova exploded inside the Butterfly Galaxies.

This will help give researchers better insight into what was happening to the star just before it died: https://t.co/m2Np1Wsr7y pic.twitter.com/IpFXne0qdy

The star ejected this circumstellar debris last year, just before it died. The finding of NASA Hubble provided scientists with a detailed description of the star before it died. University of California Santa Cruz postdoctoral scholar in Astronomy, Samaporn Tinyanont, said a circumstellar material is only observable for a brief time and observation will begin immediately after the supernova explodes.

Tinyanont and his colleagues used Hubble to make numerous ultra-fast observations of this supernova. They even transmitted a first-of-its-kind coverage of the location, directly close to the exploding star.

The researchers used archival Hubble data, theoretical models, and supernova observations to calculate the star's mass, which was roughly 14 to 15 times that of the sun when it exploded. It's critical to comprehend the group of big stars to comprehend how they die.

University of California Santa Cruz astronomer Ryan Foley believes that the stellar outburst might be an early warning system. He explained that the NASA Hubble Space Telescope provided astronomers with a view of the star before its demise.

According to a CNN article, Foley said astronomers should pay closer attention and attempt to figure out what's going on if they notice a star start to wobble or act strangely before it bursts. Researchers will better grasp what happens in the last few years of a star's existence when more astronomers discover more of these supernovae with this type of good data collection.