It was unsurprising when the Perseverance rover and Ingenuity helicopter on Mars lost touch with Earth for two weeks. Still, the NASA Jet Propulsion Laboratory's lengthy wait is now ended.

Solar conjunction caused the loss of communication, Science Times reported. The phenomenon occurs when Earth and Mars are on different sides of the sun. The location is making things harder to broadcast radio signals. During this time, Ingenuity, like NASA's other Mars explorers, took a two-week hiatus as engineers waited for connections to be restored securely. 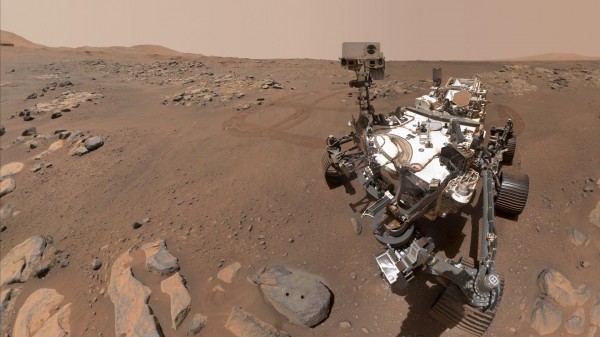 (Photo: NASA/JPL-Caltech/MSSS)
Using its WATSON camera, NASA’s Perseverance Mars rover took this selfie over a rock nicknamed “Rochette,” on Sept.10, 2021, the 198th Martian day, or sol, of the mission. Two holes can be seen where the rover used its robotic arm to drill rock core samples.

The Perseverance rover's Twitter account hailed the re-establishment of communication with a short video showing the multi-billion dollar wheeled vehicle in action.

The push took place before the confederation, which began in early October. You can see what Perseverance accomplished on its 200th Martian day in this sped-up view of the almost 600-foot trek on September 12 - each of the frames is around 30 seconds apart.

Solar conjunction is over and I’m ready to get rolling again. Nothing like the feel of Mars under your wheels.

NASA JPL said that a trip like this begins with the rover obeying directions sent over from Earth ahead of time. That initial stretch is critical because it allows Perseverance to develop a 3D map of its surroundings. The rover's autonomous AutoNav capability can utilize to avoid risks and keep Perseverance safe.

NASA also released a video on YouTube. The footage demonstrated how Perseverance employs two microphones to keep an audio record of the planet, with over 5 hours of audio gathered thus far. The film focuses more on a behind-the-scenes description of the technology and its significance to the expedition.

This weekend, NASA's Mars helicopter Ingenuity will undertake a new test flight. Engineers will spin its rotors faster than ever before to adjust to Mars's shifting weather.

NASA's Jet Propulsion Laboratory JPL announced in a tweet on Friday, October 22, that Ingenuity test flights would start as soon as Saturday, October 23. For flight number 14, the engineers will test a brief flight with a greater rotor speed.

🚁 Now that conjunction is over, #MarsHelicopter can attempt flight 14. Ingenuity successfully performed a 50 rpm spin test this week & will do a short hop no earlier than Oct. 23. This is to test out flying in lower atmospheric densities on the Red Planet https://t.co/IC4W3xgSV9 pic.twitter.com/zl5KVPgfut

Because of changes in the Martian weather, Ingenuity must spin its rotors quicker than before. The helicopter was supposed to do only five flights at first, but it was such a success that the crew decided to do more complicated flights. However, they will now have to deal with the shifting seasons on Mars.

Digital Trends said the atmosphere on Mars has been exceedingly thin, at roughly 1% of the density of Earth's atmosphere. Still, seasonal fluctuations are causing it to decrease much more. The thinning of the atmosphere is a challenge for Ingenuity, which uses its rotors to move air and stay aloft.

Last month, the team completed a high-speed spin test to ensure that spinning the rotors at rates of up to 2,800 rpm was safe. Everything went smoothly, according to JPL, and the systems operated "flawlessly."

Ingenuity is supposed to have its Test flight 14 with rotor speeds of up to 2,700 rpm. But then Mars solar conjunction happened. Now that the wait is over, Ingenuity can focus on its high-rotor-speed test flight 14. The flight will be a short distance to ensure that flying will continue to function even with decreased air concentrations.