Every year millions of tons of discarded old car and truck tires wind up in the world's waters. Despite a majority of these being either recycled, reclaimed, or burned as fuel, millions end up in landfills or illegally dumped. Some portion of these unused waste tires end up in oceans and cause even further harm.

What are Hermit Crabs? 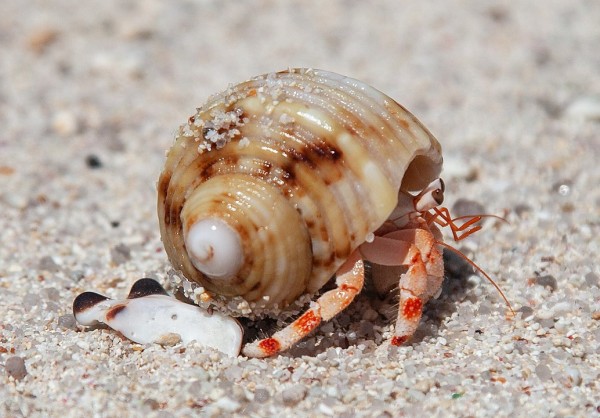 Paguroidea or hermit crabs, according to National Geographic, are a family of omnivorous invertebrates that can weigh anywhere between a few ounces to 11 pounds and live up to 40 years.

All over the globe, there are roughly 800 species of hermit crabs with almost all residing in oceans. They are omnivorous scavengers that eat microscopic mussels, clams, macroalgae, and bits of deceased marine animals.

The term hermit crab is a misnomer since not only are they not real crabs but they also have a hard exoskeleton on the front of their bodies while having a soft tail end. Because of this, they rely on the discarded shells of other animals to protect themselves. Contrary to popular belief but these crustaceans are more closely related to specific types of lobsters than crabs.

For generations, the hazardous chemicals and microplastic pollution that is brought by the discarding of old tires into the environment are widely known. However, new research suggests that tires do more than pollute the water but also endanger wildfire and their shape. When these old tires wind up in the world's oceans its hollowed doughnut-like shape makes it deadly for many crustaceans especially vulnerable hermit crabs.

A study published in the journal Royal Society Open Science, titled "Marine-dumped waste tires cause the ghost fishing of hermit crabs" find that these crustaceans, infamous for inhabiting discarded shells, climb into old discarded tires to seek shelter or meals only to find themselves trapped in human debris unable to escape its curved walls and eventually starving to death.

In only a year, researchers were able to account for more than 1,200 hermit crabs being imprisoned inside a set of 6 tires residing on the seafloor.

Lead author and ecologists at Hirosaki University, Japan Atsushi Sogabe writes that the inspiration to conduct the study came as the group studied pipefish in one of Japan's Bay back in 2012. During a dive, Sogabe encountered a tire filled with shells on the seafloor. Some contained hermit crabs. Sogabe suspected that the shape of the tires created an ecological conundrum analogous to ghost fishing wherein lost pieces of fishing great like nets or traps keep marine animals trapped.

Tires found eventually racked roughly 1,200 hermit crabs in a span of 12 months with the highest rate observed in March when researchers found more than 200 hermit crabs trapped. According to the authors, tires are just another example of a product that humans produce and discard that has significant negative impacts on the environment and on other creatures reports the Smithsonian Magazine.

RELATED ARTICLE: 'Tipping Points in the Climate System' Better Understood, Predicted Through Data from Ancient Past