Hoard of 5,500 Roman-era Silver Found Buried By The River in Augsburg City in Germany; Who Owned It?

Archaeologists have found a hoard of Roman-era silver coins buried by the river in the Bavarian city of Augsburg in Germany. In total, it weighs 33 pounds (15 kilograms) and could be the largest single ancient Roman silver hoard ever found in Bavaria.

The team was digging at a planned housing site in the Oberhausen district, the oldest part of Augsburg, before builders began the construction work when they found the stash of Roman silver dating to 1st to early 3rd century A.D. 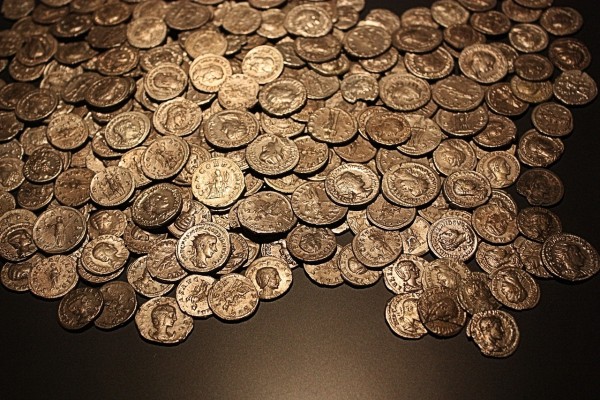 Archaeologists did not only find more than 5,500 silver coins, but there were also weapons, tools, utensils, and jewelry in the stash, which makes it the most important treasure in the Bavarian region.

Stefan Krmnicek from the University of Tübingen's Institute for Classical Archaeology said that the amount of silver coins in the hoard implies that it is not owned by someone who belonged to the lower social class at the time. He added that the coins were most likely owned by someone active in the military or the trade as it must have amounted to a lot of money in ancient standards, Arkeonews reported.

Augsburg's city archaeology head Sebastian Gairhos, who excavated the hoard, supported this view and said that the treasure would have amounted to 11 to 15 annual salaries of a simple soldier earning between 375 and 500 denarii in the early 3rd century. But what makes the treasure particularly important is that the coins were dinars dating back to the first and second centuries.

According to Ancient Origins, the silver coins belong to a wide period of reigning emperors, starting from Emperor Nero in the mid-first century to that of Septimius Severus shortly after 200 AD. Archaeologists noted that the oldest coin in the stash is 1,950 years old from the reign of Emperor Nero.

Interestingly, it also contains coins from the reign of Emperor Didius Julianus, who only ruled for 90 days, making coins during his period extremely rare.

Scattered Treasure Probably Washed Away From Its Original Hiding Place

Live Science reported that the team found the coin hoard earlier this year in an old riverbed. The treasure was scattered in the newly dug pit that likely was not its original hiding place. Krmnicek said that the hiding place was probably washed away after many centuries, particularly by a flood of the Wertach river that scattered the coins in the river gravel.

As of now, they are in the process of cleaning and studying the hoard of coins and other treasures they found. They hypothesize that those might have been buried in the early 3rd century outside the Roman city of August Vindelicum when it was the capital of the Roman province of Raetia.

But that still does not answer why the hoard of silver coins was buried. Nonetheless, it is a mystery that researchers are trying to solve as they study them.