NASA's spaceship will smash into an asteroid using the Double Asteroid Redirection Test (DART) on Tuesday if all goes according to plan.

If all goes according to plan, the asteroid will be jostled into a slightly different orbit, marking the first time humans have altered the track of a celestial object. Making history, on the other hand, is just coincidental. The true purpose is to protect the entire planet.

There's no need to be alarmed: neither the target space rock nor any other known asteroid has a probability of colliding with Earth in the next half-century. This NASA experiment, run by the Johns Hopkins University Applied Physics Laboratory in Laurel, Md., evaluates a method for rerouting an asteroid in case future Earthlings need to dodge one.

According to NPR, NASA has planned DART to launch from Vandenberg Space Force Base in California at 10:20 p.m. PST on Tuesday (1:20 a.m. ET on Wednesday).

DART will be launched into orbit on a SpaceX Falcon 9 rocket and will journey through space until it reaches the double asteroid system in fall 2022, where it will begin a collision test.

You may watch the launch live on the NASA TV channel using the video posted below or on NASA's website and NASA App. Everything you need to know about the $330 million mission is listed below.

Why are we crashing a spacecraft into an asteroid more than 6 million miles away?

Fox News said the DART spacecraft is heading for the small moonlet asteroid Dimorphos, which orbits a more enormous companion asteroid named Didymos, at a speed of around 6.6 kilometers per second. 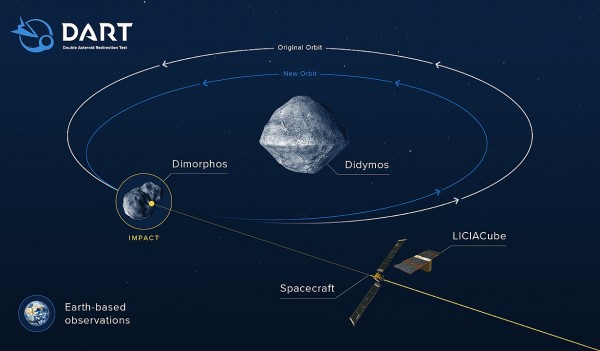 Even though no known asteroid larger than 140 meters has a high possibility of colliding with Earth in the next 100 years, only approximately 40 percent of such asteroids have been discovered as of October 2021.

According to NASA, DART will be 11 million kilometers (6.8 million miles) from Earth when it reaches Didymos in 11 months. Didymos, which means "twin," has a diameter of 780 meters (2,560 feet). In contrast, Dimorphos, which means "two forms," has a diameter of 525 feet (160 meters), or little under two football fields. Didymoon, the moonlet that orbits Didymos once every 11.9 hours, is also known as Didymoon.

How NASA Made Its 1st Non-Threatening Foray Into Planetary Defense

Andrew Cheng, a planetary scientist at Johns Hopkins University's Applied Physics Laboratory in Maryland and a primary investigator on DART, told Space.com that he had the idea for the mission that became DART on a winter morning in early 2011. At the time, he was practicing stretching exercises in his basement.

Cheng explained that DART is the first test of an asteroid deflection technique and the first demonstration of a kinetic impactor on an asteroid. In all respects, he noted, there hasn't been another space project like DART.

Cheng stated they expect to deflect an asteroid and prevent it from reaching Earth with a kinetic impactor, although this approach has never been proven. They have no idea how an asteroid will react to a high-speed spacecraft collision or how much deflection will occur. This expedition will assist us in answering these questions, which Cheng finds fascinating about DART.

To be clear, neither Didymos nor Dimorphos constitute a threat to the planet. They aren't a threat right now, and they won't be after the redirection test. NASA chose this method because it was judged perfect for testing. According to the space agency, "the collision will modify the speed of the moonlet in its orbit around the main body by a fraction of a percent, but it will change the orbital period of the moonlet by several minutes-enough to be viewed and measured using telescopes on Earth."

As things stand, no asteroid the size of Dimorphos or larger has a reasonable probability of colliding with Earth in the next 100 years. The problem, on the other hand, is with potentially dangerous items that arise out of nowhere.

RELATED ARTICLE: How to Watch Double Asteroid Redirection Test on Wednesday? NASA Will Crash SpaceX Falcon 9 Into an Asteroid to Explore Defense Options for Earth