Woman Accidentally Swallows AirPods Instead of Painkiller in Another Unfortunate Event

A 27-year-old TikToker has become popular after mistakenly swallowing her Apple AirPod instead of taking her pain medicine.

Carli Bellmer, who goes under the Twitter and TikTok handle @IamCarliiib, told her followers that she could pass the AirPod after an X-ray proved it. Bellmer claimed that before the earphone left her body, she sent a voice note to a friend that the AirPod audibly conveyed from inside her stomach.

She told her 3,200 TikTok followers that she swallowed her AirPod. According to Bellmer, she crawled into bed with the ibuprofen 800 in one hand and her left AirPod earbud in the other. The Boston podcaster put in what she believed was the tablet and took it with water. However, she later realized she had swallowed the wrong item. She added that she tried puking the AirPods, but it would not come out.

On TikTok, the video has received more than 2.4 million views thus far. The video got viral on Twitter as well.

I swallowed my left airpod pic.twitter.com/SnaxgecUMU

Bellmer noted in her follow-up TikTok videos that she had sent a voice memo to a friend, which the AirPod audibly transferred from inside her abdomen because her iPhone was still connected to the AirPod. A more recent X-ray scan revealed that the AirPod was no longer in her stomach, according to the TikToker.

It isn't the first time someone has inadvertently swallowed their AirPods. ScreenRant said a Massachusetts man was transported to the hospital after a lost AirPod was discovered in an odd location. 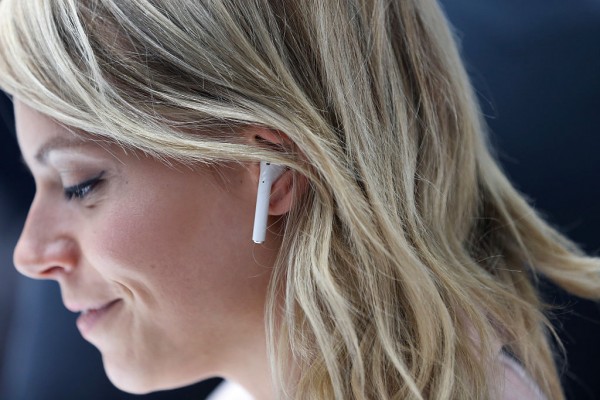 (Photo : Stephen Lam/Getty Images)
SAN FRANCISCO, CA - SEPTEMBER 07: An attendee wears an Apple AirPods during a launch event on September 7, 2016 in San Francisco, California. Apple Inc. unveiled the latest iterations of its smart phone, the iPhone 7 and 7 Plus, the Apple Watch Series 2, as well as AirPods, the tech giant's first wireless headphones.

ALSO READ: Everything that you need to know about the new AirPods 2

Bradford Gauthier, a resident of Worcester, Massachusetts, realized that sleeping with AirPods had dangers.

Gauthier put his AirPods in and went to bed after shoveling snow for two hours. He awakened the following day to discover that one of his AirPods was missing. He also mentioned that he was having some chest pain.

In the morning, Gauthier claimed he went out and plowed snow for an hour. He told WWLP News 22 that he attempted to drink a glass of water when he returned home but could not do so.

Gauthier's family speculated that he could have ingested it, although this seemed far-fetched. After a trip to the hospital, USA Today said his doctor ordered an x-ray, which revealed the AirPod trapped in his esophagus.

Gauthier came home to shovel snow after an emergency endoscopy removed the AirPod. According to the GI doctor, a blockage that is neither painful nor excessively uncomfortable is quite rare. He claimed that it never occurred to him that sleeping with headphones may be dangerous, and he considered himself fortunate.

The AirPods and a new iPhone were given to the seven-year-old as a Christmas present. According to WSB-TV Channel 2 News, the boy was holding it in his mouth by the long end.

Check out more news and information on Medicine and Health and Technology in Science Times.