The ocean conservationist Sea Shepherd, along with other scientific experts, recently concluded their first venture that focuses on studying two endangered species of dolphins. The research aimed to observe and gather data from the specified dolphins that are currently thriving in the vast rivers of the Amazon. The expedition was conducted in 19 days around the vicinity of the Amazon, where the animals are endemic. The research found some Amazonian dolphins without life, and fishing bycatch is among the suspected reasons. Among the victims, one was harmed due to the harpoon marks on its body, and another was inflicted with a harpoon and net marks.

Fishing in Brazil vs. Dolphins in the Amazonian River 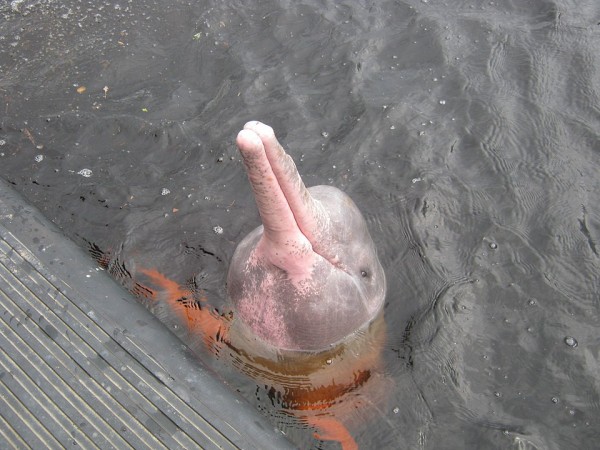 The cetaceans discovered in the Amazon river were analyzed and were found to be healthy before their demise. According to a report by EcoWatch, there were no signs of natural cause of death detected in the animals. In the same report, Sea Shepherd Brazil CEO Nathalie Gil said that humans uncontrollably kill dolphins through hunting and the utility of fishing nets despite the effectiveness of Brazilian laws that are made to protect the animals and apprehend those that disrupt the cetacean's habitat.

Gil added that the fishermen are aware of the regulations, which require them to set the dolphins free if they accidentally catch one immediately. However, most of the fishers are utilizing harpoons to tame the animals that are being agitated, thinking that this brutal process would avoid their precious nets from ripping apart. Gil said that a few fishermen are not aware that the wiggly marine animals in their nets are dolphins. But even many of them know when a cetacean is in their catch, they still throw harmful hunting gears.

The research on the conditions and the preservation of dolphins in the Amazon river was made possible through the collaborative efforts of the Sea Shepherd and Brazil's National Institute for Research. The main focus of the research was the endemic dolphins of the Amazonian paradise called the tucuxi river dolphin and the Amazon river dolphin, also known as the Sotalia fluviatilis and Inia geoffrensis, respectively. Among the two species, the Inia geoffrensis are more famous to the public due to their unique, striking color, and this led the tourists and locals to call them the pink dolphins.

Research to End the Decline of Population in Dolphins

Both the cetacean species are fond of living in the freshwater, but unfortunately, the same biological habitat became the easiest way to poach and kill many of their kinds. Throughout the years, the Sotalia fluviatilis and Inia geoffrensis had their population become fewer. The unyielding plunge of their deaths earned the species a spot in the IUCN Red List of Threatened Species. This pushed authorities to impose a mandate that would not allow the fishing and killings of the Sotalia fluviatilis and Inia geoffrensis.

But even though there are strict measures at play, a study published in the journal PLOS ONE, titled "Both cetaceans in the Brazilian Amazon show sustained, profound population declines over two decades," found that there had been a perpetual decline in the number of dolphins on the regions of the Brazilian Amazon. The Sea Shepherd and INPA hope to reverse the tides and grow the population of dolphins in the area through the information and analyses they harnessed from the expedition.

RELATED ARTICLE: Ocean Temperature Responsible for Maintaining Cooler Temperature in North America and Drying Other Regions of the Continent

Check out more news and information on Ocean in Science Times.