Neanderthal Teeth May Have Grown Faster, Four Months Earlier Than In Modern Humans as Evident in a 120,000-Year Old Milk Tooth

Archaeologists found a preserved Neanderthal milk tooth near Krapina in Croatia that belonged to a seven-month-old baby who lived 120,000 years ago. An analysis of the fossil reveals it emerged four months sooner than in modern human babies.

The team said that the early emergence of teeth helped Neanderthal babies to eat solid foods sooner, which is needed to fuel their larger brains and for their bodies to develop faster. 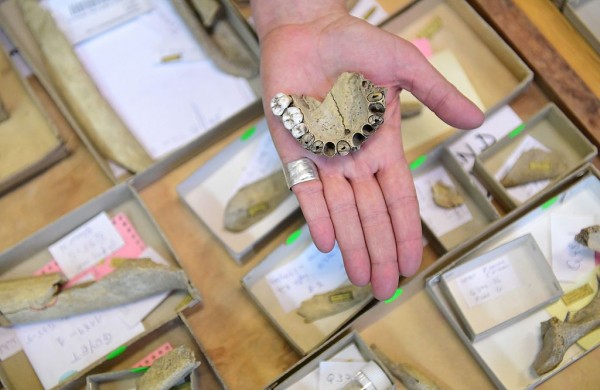 (Photo : Getty Images)
Helene Rougier, anthropologist at California State University Northridge in the United States, displays some of the 96 bones and three teeth from five Neanderthal individuals which were found in the Belgium Goyet cave at the Royal Belgian Institute of Natural Sciences, in Brussels, on December 21, 2016. Deep in the caves of Goyet, in present-day Belgium, researchers have found the grisly evidence that the Neanderthals did not just feast on horses or reindeer, but also on each other. / AFP / EMMANUEL DUNAND (Photo credit should read EMMANUEL DUNAND/AFP via Getty Images)

The new research sheds light on the differences between how modern human babies and Neanderthal infants develop after birth. Sky News reported that scientists at the University of Kent's school of anthropology believe the former develops much slower than the latter as evident in the 120,000-year-old Neanderthal milk tooth they found.

Unlike Neanderthal infants, the Centers for Disease Control and Prevention (CDC) said that human babies start to eat solid food at about six months, and only when they reach their eighth month they can consume a variety of foods from all food groups. But before that period, human babies typically only consume their mother's milk or formula.

On the other hand, Neanderthal infants develop their milk teeth at an earlier age of four months. Their teeth enabled them to eat meats, vegetables, and other solid foods at an earlier age to meet the required energy needed for their larger brains.

Archaeologists used state-of-the-art technology to examine the Neanderthal milk tooth they found, wherein they found evidence that they sprouted quite early. Milk teeth are helpful to scientists because they can study when they emerged. Scientists said that milk teeth begin forming even before an infant is born and further develop as they grow.

Since the teeth are made up of layers of enamel, milk tooth retains a record of their own growth that was preserved well as fossils. Through non-destructive virtual histology that relies on synchrotron radiation, the team was able to see the inside of the milk tooth and identify the exact moment when the Neanderthal infant was born.

According to Daily Mail, archaeologists today are still finding fossils of Neanderthals despite being extinct for 40,000 years due to being out-competed for food and shelter by Homo sapiens. The milk tooth is just one of the recent fossil finds reported.

Study author Dr. Patrick Mahoney said that their findings reveal that these Neanderthals have a faster rate of dental development, which is likely to help them process more demanding supplementary foods at an earlier age than a modern human child. It is consistent with other studies that suggest Neanderthals have big brains by the time they are two years old, which likely required lots of energy.

Meanwhile, study co-author B. Holly Smith told Inverse that the speed at which the Neanderthal baby teeth grew could mean that the species faced a higher mortality rate. That means when teeth appear earlier, their bodies may have also aged faster compared to modern humans.

Check out more news and information on Neanderthals in Science Times.