Every year, as November progresses and the last of the leaves fall to the feet, Americans and the rest of the United States get closer to one of the finest American holidays: Thanksgiving. Thanksgiving is traditionally a day spent watching parades, spending time with family and friends that we don't get to see as frequently as we'd like, overeating, and being grateful for what we have.

But, if you're celebrating Thanksgiving, have you ever taken advantage of the chance to go stargazing? Here's something for all you stargazers, whether you're in the United States or overseas. 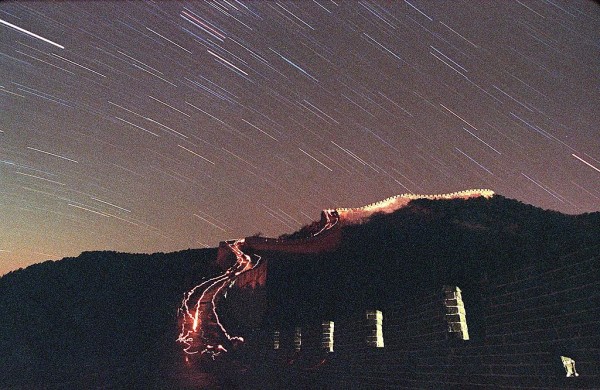 (Photo : STEPHEN SHAVER/AFP via Getty Images)
BADELING PASS, CHINA: The Leonid meteor shower lights up the sky above China's Great Wall as stargazers brave the minus 20 degrees Celcius (minus 4 degrees Fahrenheit) temperature and walks up the wall with their flashlights on November 18 in Badaling.

The biggest human-made object presently orbiting Earth will pass across the northern contiguous United States in the evening on Thanksgiving. The International Space Station (ISS) looks like a brilliant, non-twinkling "star" with a yellow-white hue that continuously glides across the sky. It may be seen for a few minutes or longer, depending on its exact course.

NASA's Spot the Station and Heavens-Above are two websites that can tell you the requirements on how to see the ISS on Thanksgiving evening. Seven individuals are currently on the ISS. One is a German astronaut, two are Russian cosmonauts, and the rest are American astronauts.

Unfortunately, if you reside somewhere near Tennessee's boundary with Alabama and Mississippi, you won't be able to view the ISS since it will be either too low to see or passing by when the local sky is too bright to see it.

ALSO READ: Thanksgiving in Space: This Is How Astronauts Celebrate the Holiday Aboard the International Space Station

Three brilliant planets are stretching out in a line there, Space.com said, namely: Venus, Saturn, and Jupiter.

The brightest object in the Thanksgiving evening sky is by far Venus. With a brightness of -4.6, it glows more than eight times brighter than Jupiter and 132 times more luminous than Saturn. Venus is extraordinarily brilliant because of the highly reflecting clouds that constantly obscure its surface; the planet is also far closer to Earth than Jupiter or Saturn. Since Venus is approximately seven times closer to the sun than Jupiter and about 14 times closer than Saturn, it receives far more sunlight to reflect.

With a telescope, you may see Venus as a broad crescent with 32 percent illumination. Look quickly, for Venus will be far too low to the south-southwest horizon after 6:45 p.m. local time to offer a steady image.

However, just because Saturn isn't as brilliant as Venus doesn't imply it's unattractive. In fact, Saturn is now tied for 12th place with the similarly colored Altair among the sky's brightest stars. Any telescope with a magnification of at least 30-power will be able to see Saturn's famed ring system. Saturn will be visible until around 8:45 p.m. local time, after which it will get too low and set.

Finally, Jupiter seems to be somewhat larger in visual size than Venus when viewed through a telescope. Even in steady-held binoculars, all four of the famous Galilean satellites will be visible.

Callisto will be the furthest from Jupiter, followed by Ganymede, and finally, Io, closest to Jupiter. Europa, on the other hand, will be all by itself on Jupiter's opposite side. Jupiter will be visible until some time 10 p.m. local time.