Nature-Inspired Drones to Lend Support in Search and Rescue Operations 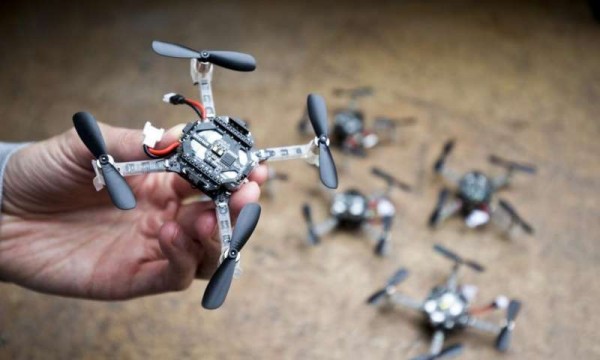 In this tech-savvy age, it is evident that nature has continued to inspire technological developments. These include the creation of robotic structures, from small, durable cockroach-like designs to high-speed tunabots to larger flying fish projects, and a lot more.

In a recent publication in Science Robotics, a research team from Liverpool University report how their insect-inspired swarm of flying robots-that is, a swarm of tiny lightweight drones-could be used in search and rescue missions. As explained by the researchers, the small size of these drones allows them to move in narrow spaces, where people could not normally reach. And because they are light, it would also be convenient for users to operate the robots.

A number of researchers from TU Delft, Radbound University, and Liverpool University have teamed up to work on what they call a "swarm bug algorithm" that enabled the tiny drones to fly autonomously and explore a location and then fly back to their original location.

The team first installed cameras on small commercial drones that each weighed about an ounce before sending them out on a mission to find two dummy victims. The simulation of the disaster scenario was done in an environment replicating an office. And in just six minutes, six drones explored about 80 percent of the area. Being in a group was essential to the ability of the robots, so if only one drone-no matter the size-explored the area, 80% coverage in six minutes would not be possible. Aside from this, another advantage of the drones swarming together is its fail-safe engineering. When one drone found a dummy victim, it was not able to send images to the user due to an error that occurred in the camera hardware. This was, however, solved by another drone equipped with a working camera.

The tiny robots were also fitted with wireless communications chips that would allow each of them to detect and avoid bumping into each other, by measuring the strength of the signal emitted by the chips.

A major challenge that the researchers encountered during the development of the technology was how the drones would be able to navigate places that are not familiar to them. They then addressed this while working on their swarm bug algorithm. Insects, as Liverpool University researchers explain, refer to landmarks just as people would. For them, relevant are places such as their nests or their food sources.

Guido de Croon, the principal investigator of the project explained the baseline of the development. "The swarm of robots first spreads out into the environment by having each robot follow a different preferred direction," he said. "After exploring, the robots return to a wireless beacon located at the base station."

Kimberly McGuire, a PhD. student who carried out the work explained that the algorithms do not make maps of the drone's environment. It rather helps the drones respond to obstacles detected from the environment. She went on to say that although possible and extremely helpful, creating detailed maps for tiny robots would be very costly and prohibitive.

Operation "Tiny Drones to the Rescue"

In the future, the team opts to use their technology in surveillance and search and rescue missions, as simulated and initially aimed for when the NWO Natural Artificial Intelligence program awarded the team funding. This would help the rescue workers to focus their energy on more important areas like where there are still people inside a collapsing building instead of searching for people in an already collapsed building.