Sharing is Caring: Vampire Bats Regurgitates their Blood Meals and Shares them with their Neighbors 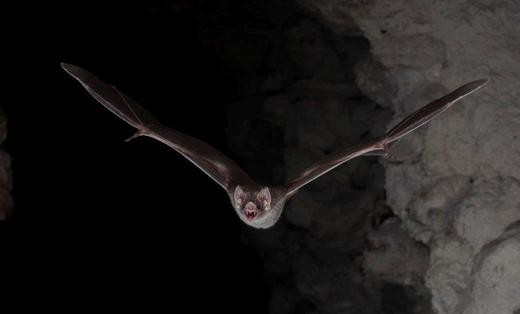 (Photo : Reuters) Like other bats, vampire bats are nocturnal and lives mostly in caves or crevices. The only difference they have from other bats is their diet.

Bats are an interesting bunch. They belong to the order Chiroptera, the only group of mammals capable of flight. Chiroptera is the second-largest order of mammals next to the rodents. Popular culture depicted bats as something ominous and something to be afraid of. They are often pictured out as a vampire's companion or as the form a vampire would shapeshift into. In truth, the most common bats that humans encounter are either frugivores (fruit bats) or insectivores. However, there is a species of bats that prey on the blood of livestock, and they are aptly called vampire bats.

Bats with a rather peculiar diet

Vampire bats belong to Phyllostomidae, the family of New World leaf-nosed bats, and categorized under the subfamily Desmodontidae. Like other bats, these species are nocturnal and feed at night. Because of their diet, they developed razor-sharp teeth to be able to suck the blood of their prey.

Various studies have analyzed the probable reason behind the vampire bat's hematophagy. In all the genus under family Phyllostomidae, only the bats under Desmodontidae feed on blood. Scientists hypothesize that this adaptation occurs only once. After all, feeding on a diet of blood can bring in more harm than help: iron poisoning, risk of having diseases such as rabies, HIV, and Ebola, and blood generally isn't full of nutrients and vitamins. Hematophagy may seem too specialized for these species of bats. However, there is something more mind-boggling than the vampire bats' preferred diet.

Sharing is a virtue with these chiropterans

Scientists recently observed that vampire bats would regurgitate their blood meals to share it with their neighbors. What's so different about bats sharing meals? Usually, in the animal kingdom, animals would do things for another animal in exchange for something else—food, protection, and so on. In the case of these vampire bats, they share their meal with their neighbors with no strings attached.

It seems the answer to this phenomenon lies in captivity. The methodology used by the scientists from the Smithsonian Tropical Research Institute (STRI) includes housing female vampire bats with their captive-born offsprings in a closed laboratory, which served as the colony for these bats for as long as less than a couple of years (22 months). The researchers, with the help of Simon Ripperger from the Museum fur Naturkunde in the Leibniz-Institute for Evolution and Biodiversity Science, developed sensors.

These tiny sensors are then attached to the bats allowing them to monitor the social network of the entire bat colony. They have returned these captive bats to a hollowed tree with an existing colony and attached the sensors to 27 females bats living in the same roost. They had concluded that the bats developed their social bonds during captivity, which they had maintained when they were set free in the wild, realizing that the sharing of the blood feed is not out of convenience only. In an interview with the Daily Mail, Gerald Carter, co-lead author of the study, explained: "'What's quite common in animal cooperation is doing something where we both benefit simultaneously."

Researchers are still convinced that there is some benefit to this act within vampire bats, but they have not yet found the answers.