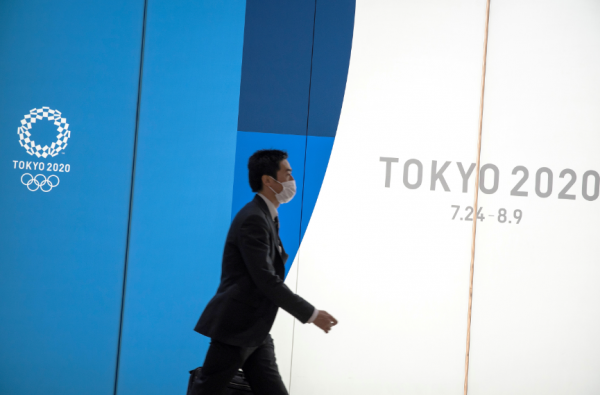 (Photo : Reuters)
A man wearing a protective face mask, following an outbreak of the coronavirus, walks past an advertising billboard of Tokyo Olympics 2020, near the Shinjuku station in Tokyo, Japan, February 27, 2020. REUTERS/Athit Perawongmetha

Just weeks after recovering, a Japanese woman is tested positive yet again with COVID-19.

Experts are now more worried about reports of reinfection of recovered patients. One woman in Japan who works as a tour bus guide has tested positive again with COVID-19 weeks after recovering, Osaka's prefectural officials reported on Wednesday, February 26.

This woman is now the first reinfected case in Japan amid growing concerns about the spread of the infectious disease.

This prompted other countries to create measures to ensure their citizens' safety from the outbreak. Iran has already banned Chinese citizens from entering their country after reporting a growing number of confirmed cases of 245 and 26 deaths.

As of date, Japan has already recorded 189 confirmed cases of COVID-19, excluding those 639 aboard the cruise ship Diamond Princess that was docked for two weeks at Yokohama, and a third death recorded on Wednesday. It is considered as one of the largest concentrations of COVID-19 outside China, the World Health Organization reported.

Although there have been a number of reinfection cases in China, particularly in Wuhan province the epicenter of the virus, none of the countries have reported second positive tests not until recently.

After developing sore throat and chest pain, the woman in Osaka, Japan, tested positive on Wednesday, the prefectural government said in a statement describing her as being in her 40s. She was discharged on February 1 after being confined in the hospital since late January before she contacted the disease again.

ALSO READ:  Coronavirus Effects: What Happens to the Body of Infected Individuals

Japan's health minister Katsunobu Kato said in a Parliament that the central government will ask for the list of patients who were infected once and keep tabs on them in case reinfection might occur. Experts worry that this illness could remain dormant even after recovery.

"Once you have the infection, it could remain dormant and with minimal symptoms," said microbiology and pathology professor at the New York University.

He added that when the virus gets into the lungs, it gets more severe than the first infection and that the 2020 Olympic Games that are due to take place in Tokyo "should be postponed" if the outbreak still continues. But the officials have insisted that it will still go ahead as it stands.

The sports and cultural events are to be scrapped or curtailed for 14 days in the battle to stem the virus, which the Japanese Prime Minister described as "crucial" in the country's bid to contain it. Even the theme parks like Disneyland Tokyo will require all their staff to wear masks from Friday, while Studio Ghibli a popular museum dedicated to Japanese animation has completely shut until March 17.

Schools have also been asked to remain closed through Japan's spring break, ahead of the start of the new term this April as ordered by the Prime Minister. The country has changed its strategy in combating contagion, seeking to slow its spread and minimize the number of deaths.

Japan now ranks fourth on the list of countries with the most number of cases excluding the Diamond Princess, according to experts from Johns Hopkins. The vast majority are in China with 82, 171 cases, followed by South Korea with 1,595 and Italy with 453.