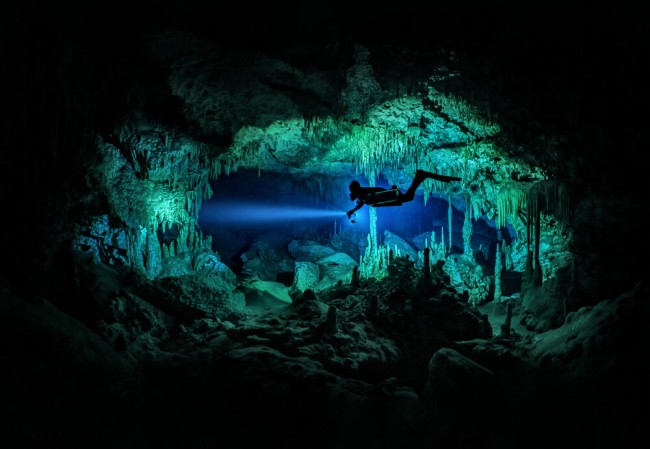 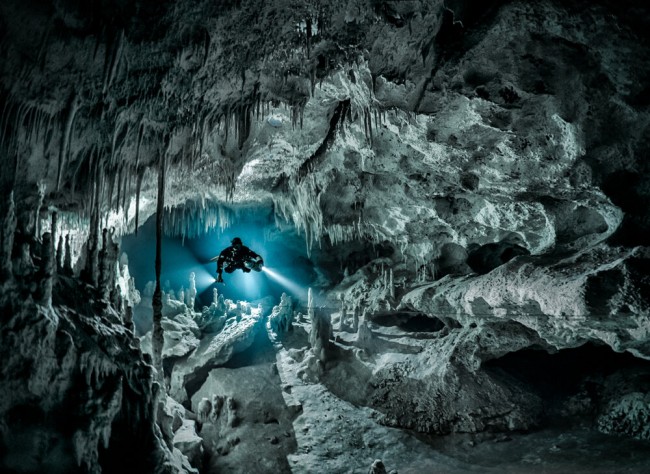 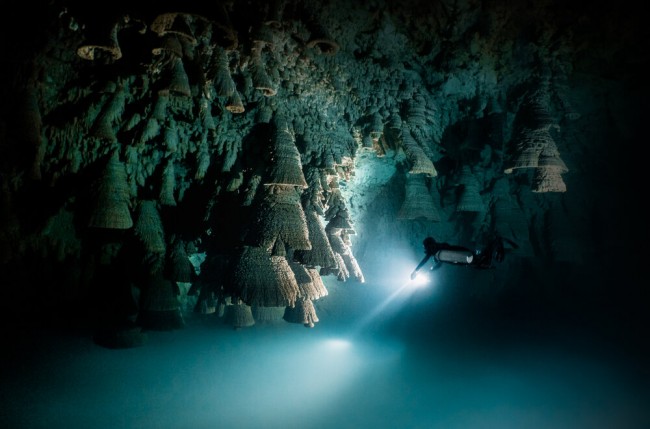 Forty-nine-year-old Martin Broen from Buenos Aires, Argentina recently shared his portfolio of the stunning photographs he captured during three years of scuba diving in Riviera Maya in Mexico.

His journey into the deep unknown involved swimming into the vast abyss and squeezing through tight caves with stalactites. The photographs he took embody the beauty of the underwater world.

While exploring the seabed, Broen found bones and fossils of humans and extinct animals such as mammoths. He described his expedition as 'amazing and exciting', as it felt like he was in outer space, exploring the planets. He adds that it was unlike anything he had ever done before.

He said cenotes, which are entry points into the underwater cave systems, allow passage from the jungle into the 'magical' underwater world. He accounts how only a few sun rays that penetrate through the sinkhole provided him with light, as well as the diving torchlight he brought with him.

He said that without light, the cave would otherwise be pitch-black with some bright blue lighting. In one of his photographs, it showed how a beam of sunlight penetrated the sinkhole and flooded the cave, leaving an extraordinary effect.

He added that water appeared in a tinge of green in some areas. According to him, this was due to the accumulation of tannic acid after heavy rains, which provided a glowing neon tone and amazing background colour for the big hanging formations.

Also Read: In Sync: Dog and Horse Share a Common Language During Play

The Lowdown on Martin Broen

Broen is an industrial design and innovation expert who find passion in photography. He's a nature-lover who hopes to be able to communicate its extraordinary beauty to others.

He is also a technical diver and underwater photographer who aims to share the beauty possessed by the deep waters, yet to be seen by others. He also holds the opportunity to design and build custom gear for diving.

To view more of Broen's photographs, visit his website at martinbroen.com.

The Riviera Maya in Mexico

The Riviera Maya is a tourism and resort district located south of Cancun, Mexico. It sits along the coastal Federal Highway 307, along the Caribbean coastline of the state of Quintana Roco and is located in the eastern part of the Yucatan Peninsula.

Originally called the "Cancun-Tulum corridor", it was later renamed as such in 1999 with the promotion of Licentiate Miguel Ramon Martin Azueta. He was the municipal president of Solidaridad, Quintana Roo at the time.

There are about thousands of cenotes, or natural caves brimming with freshwater, in Mexico's Riviera Maya. The underwater sinkholes were formed when limestone caves collapsed a million years ago. The collision resulted in underground pools that lucky travellers of today can take a dip into.

Major attractions found in the Riviera Maya are coastal and aquatic reef activities relative to the coastal water and the Belize Barrier Reef. The reef starts near Cancun and goes on along the stretch of the Riviera Maya continuing southward to Guatemala. This barrier reef system is the second-longest in the world.