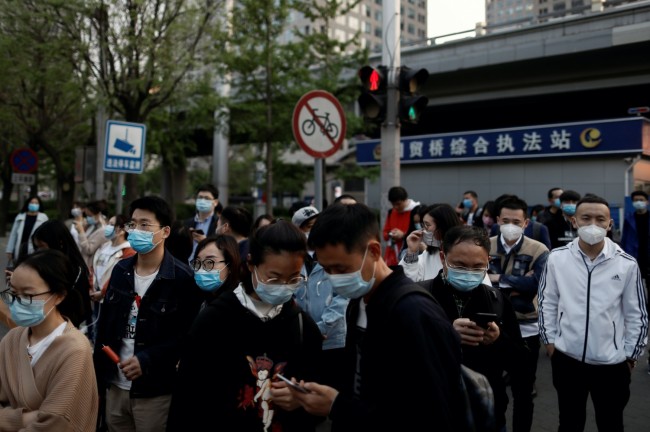 (Photo : Photo from Reuters Connect) Is China experiencing its second wave of coronavirus?

The Chinese are fearful of a possible second wave of the coronavirus as reports have claimed 16 new cases in the Henan province. The outbreak reportedly started among medical staff at Jia County Hospital.

One staff member reportedly came back from Wuhan; the location believed to be the source of the virus, after 14 days in quarantine.  This followed a report confirming 16 new coronavirus cases on April 18, the lowest recorded since March 17, as cases went down from 27 from the previous day.

As of April 18, the total number of confirmed coronavirus cases have reached 82, 735, and a total death toll of 4,632 in the mainland.

Authorities are now to impose travel restrictions in fear of the possible uprising second wave. The government has ordered the use of facemasks for anyone leaving their homes. They also asked to have their temperatures taken.

According to the Express, businesses in Jia County remain closed, except for supermarkets and local farmers' markets.

About 600,000 people are forcefully living under curfew, according to the country government's Weibo account.

Residents shared on Weibo, the country's approved social media provider, about how they faced their daily life on lockdown.

A local said that all households are on lockdown and that nobody could leave town. If they did, they would not be able to return.

Another resident voiced out how they believe the government was giving them false information in saying that the epidemic had been under control.

Authorities continue to keep their guard up against a significant comeback of the coronavirus. Just like the rest of the world, China faces social and economic instability due to the lockdown brought about by the virus.

The northeastern province of Heilongjiang has seen a noticeable increase in infected travelers coming from Russia in recent weeks. The region is now battling to contain a blowup in local cases.

The information from China's National Health Commission showed that nine of the new cases reported on Saturday were imported infections carried from different locations. It had been the lowest recorded since March 13, eight cases less than the previous day. The remaining seven confirmed cases were locally transmitted.

Heilongjiang, in north-east China, has reported 39 new local cases in the past ten days, or more than 50 percent of all the new 73 domestic cases reported in the mainland during the same period.

According to a statement on the provincial government website, the Heilongjiang government is warning against family gatherings, cross infections at hospitals, and slow reporting in epidemic investigations, to quickly contain possible outbreaks.

Wang Yongkang, the vice governor of Heilongjiang, stressed that the biggest political task they are currently faced with is to stop the rebound and spread of the epidemic.

In other regions in mainland China, all areas in central Hubei province, including Wuhan, are now considered low-risk.

Areas that are mediated as medium-risk in China include two districts in Harbin, the city of Suifenhe in Heilongjiang, two communities in the southern city of Guangzhou along with the city of Jiaozhou in eastern Shandong province.

Read Also: Scientists Create CRISPR-based Coronavirus Test That Gives Off Results in 40 minutes: It Works Like a Pregnancy Test