The world was shocked to hear the news of the explosion in Beirut caused by 2,700 tons of ammonium nitrate stored in the city's port. The explosion has claimed at least 100 lives and injured thousands of people.

The explosion has also caused many to lose their houses as the twin blasts damaged buildings. Now, the National Aeronautics and Space Administration (NASA) has mapped the area of Beirut, showing the devastating damage the explosion has caused.

In collaboration with the Earth Observatory of Singapore, NASA's Advanced Rapid Imaging and Analysis (ARIA) used satellite-derived synthetic aperture radar data to create the map showing the extent of the damage caused by the twin blasts in Beirut, Lebanon last August 4. 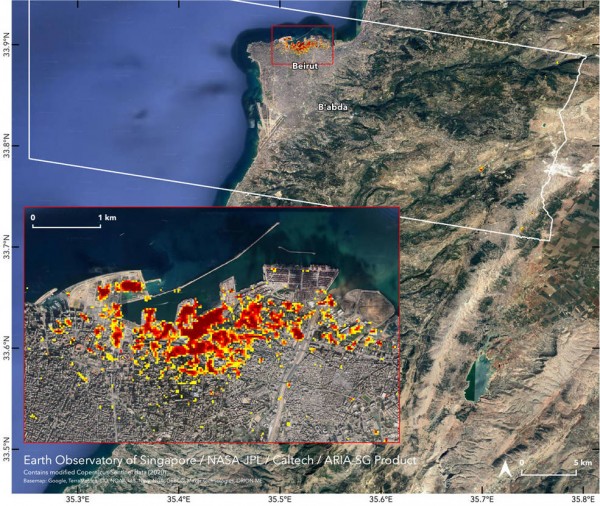 The synthetic aperture radar data from space is typically used to compare the before and after ground surface changes after an earthquake or a major event. In Beirut's case, it showed the devastating result of the explosion.

The map shows red, orange, and yellow pixels indicating the severity of the damage. The dark red pixels showed those areas at and around the Port of Beirut representing the severe damage.

While the areas in orange pixels represent those who are moderately damaged, and areas in yellow pixels are those areas which are likely to receive less damage. Each of these colored pixels signifies an area of 33 yards (30 meters).

Using maps like these will help authorities identify the severely damaged areas to locate people that may need the most assistance. According to authorities, the estimated damage of the explosion could be billions of dollars' worth.

NASA's map contains modified Copernicus Sentinel data processed by the European Space Agency (ESA) and analyzed by the scientists from the ARIA team at NASA's Jet Propulsion Laboratory at Caltech, Pasadena, California and by the Earth Observatory of Singapore.

What is synthetic aperture data?

Synthetic aperture radar (SAR) is used to create a two-dimensional image or three-dimensional reconstructions of objects like landscapes. It is inspired by the side-looking airborne radar (SLAR) and usually mounted on a moving platform, either an aircraft or a spacecraft.

For SAR to create an image, successive pulses of radio waves are transmitted to a target scene. The echo of each pulse of radio waves is received and then recorded using a single beam-forming antenna, with wavelengths measuring from a meter down to a millimeter.

The antenna location relative to the target changes with time as SAR mounted on an aircraft or spacecraft also moves.

The recording from multiple antenna positions is then combined due to the signal processing of the successively recorded radar echoes. Due to that, the synthetic antenna aperture is formed, allowing the creation of high-resolution images.