Cargo ships refueling in Algoa Bay, South Africa have been disrupting the nearby ecosystem, especially the penguin populations. The Marine Protected Area has been vulnerable to noise pollution, foreign tourism, ship traffic, and oil spills.

Environmentalists have been especially alarmed after the disastrous Mauritius oil spill that devasted marine life. Algoa Bay has already experienced two oil spills; the first in 2017 and a second one two years later. 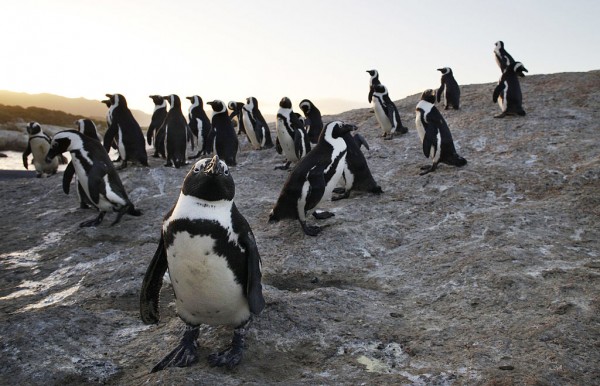 Conservationists have their eye on a storage tanker in the bay which holds around 100,000 metric tons of fuel and has refueled cargo ships for the past four years. The Algoa Bay Conservation group is fighting for the end of bunkering in the area.

At the coast of the Eastern Cape province live the largest population of African penguins and several seabird species. The African penguins have been an endangered species under the International Union for Conservation of Nature.

Algoa Bay is also home to bottlenose dolphins and sardines. Lloyd Edwards, who leads the marine tours at Raggy Charters, described the bay as a hotspot for bird feeding. 'People used to be blown away by the [number] of animals we had in this bay,' he said. However, ship-to-ship refueling activity has caused many animals to leave due to noise pollution.

During the 2019 oil spill in July, around 100 penguins were covered in oil. The bunkering has caused the African penguin population to fall under 40,000. In 2015, South Africa's Environmental Affairs department accounted for 10,900 and dramatically dropped to nearly 6,000 breeding pairs by 2019.

Also, 'the oil on their feathers takes away their waterproofness,' explained Lorien Pichegru from Nelson Mandela University. Adult penguins with oiled feathers also tend to abandon their eggs and their young, leaving them to die of cold and starvation. As they try to clean themselves, the penguins ingest harmful toxins which damage their organs and hinder their ability to breed.

For more than 30 years, African penguin populations have decreased by 60%. They can only be found in Mozambique, Namibia, and South Africa. The decline of their population has been the result of global warming, oil spills, overfishing, noise pollution, habitat destruction, and other human activities. Pichegru warns that more threats 'might kill the entire species.'

Although some parts of the bay were declared as Marine Protected Areas, bunkering activity disturbs many migratory species such as turtles, sharks, seabirds, dolphins, and whales. Noise pollution from engines interfere with marine animals that use sonar and sound, 'disrupt[ing] the penguins' and dolphins' ability to find fish,' said Gary Koekemoer of the Wildlife and Environment Society of South Africa.

Bunkering times have been regulated after the 2019 spill, but conservationists hope to rid of human activity for good. Captain Jake Keeton also expressed his concern about the remaining African penguin populations.

Penguins don't only find food for themselves, they also 'push fish together into a bait ball' for other species, explained Keeton. If the African penguins disappear, all other species in Algoa Bay will suffer.

Read Also: Oil Spills: Here's Everything You Need To Know