Where Did Penguins Originate? Hint: It's Not Antarctica

Penguin populations are usually associated with the polar ice caps, most likely originating from Antarctica. A team of scientists from the University of California in Berkley has determined that penguins first lived in Australia and New Zealand nearly 22 million years ago.

The new study has been published in the Proceedings of the National Academy of Sciences journal. Collaborating with several other universities and museums, the team analyzed the origins of 18 penguin species.

According to the paper, "the penguin crown-group originated during the Miocene [period]. Penguins first occupied temperate environments and then radiated to cold Antarctic waters."

Blood and tissue samples allowed scientists to trace back how penguins became diverse throughout millions of years, and how they moved south to Antarctica. They believe that the emperor and king penguins left their ancestors and migrated to Antarctica due to the abundant supply of food available. These two specific penguin species have caused experts to debate about where they fit in the penguin family tree and are believed to belong to a 'sister group.' 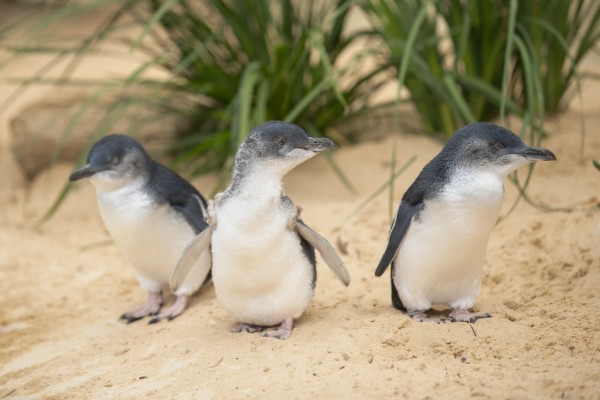 (Photo: Mark Kolbe/Getty Images)
Penguins are seen on display in the aquarium at Sydney Zoo on February 24, 2020, in Sydney, Australia. Sydney Zoo, located at Bungarribee Park in Western Sydney, is the first new zoo to be built in Sydney in more than 100 years. The Zoo opened to the public on December 7, 2019.

Most likely, the penguins swam towards South America and southern Africa about 12 million years ago the Drake Passage opened. Today, penguins can be found in a few subtropical regions in climates a lot warmer the Antarctic tundra.

Although penguins can have adapted to shifting temperatures, they are still vulnerable to the rapid changes in climate change. UC Berkeley integrative biology professor, Rauri Bowie, shared that penguins have lived in the South Pole's negative temperatures, but also live in Australia and New Zealand where waters reach 48 degrees Fahrenheit and in the Galapagos Islands where the warm waters reach 79 degrees Fahrenheit.

However, it took penguin species millions of years to survive in such warm habitats, which have resulted in diverse species. At the current rate of global warming, 'penguins are not going to be able to adapt fast enough to keep up with changing climate,' said Bowie.

The team also observed the genetic adaptations that regulated body temperature in different types of climates, which took the penguins millions of years. The animal species do not have the same amount of time to adjust to the rapid rate of climate change, alongside other threats to their populations such as overfishing, unnatural predators, and oil spills.

Juliana Vianna from Pontifical Catholic University said, "Right now, changes in the climate and environment are going too fast for some species to respond to the climate change." Melting sea ice gives the emperor penguins less ground for breeding and resting. Warming oceans in Antarctica also kill off the krill population, their primary source of food.

In 2016, storms caused emperor penguin chicks in the South Pole to drown as sea ice was destroyed, nearly wiping out the entire colony. For the next two years, recurring storms continued to kill off chick populations.

Over the past five decades, nearly 75 percent of Antarctic penguin species have disappeared. The same trend is seen in subtropic penguin populations such as the Galapagos and South Africa, where storms and warming waters caused a dramatic drop in their numbers.

READ NEXT: Bunkering Activity in Algoa Bay Are a Major Threat to African Penguin Populations