An effective gene therapy for Krabbe disease treatment done in dogs might lead to a potential approach for the same disease in human children, a new study suggests.

A research team, led by the University of Pennsylvania, details an effective gene therapy procedure used in dogs to lasting effects, highlighting the potential for a similar approach to children. The methods and results of their studies are published in the latest Journal of Clinical Investigation (JCI). 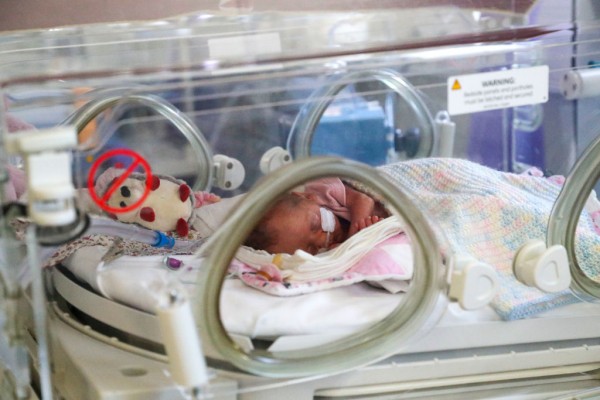 (Photo: Steve Parsons - Pool/Getty Images)
FRIMLEY, ENGLAND - MAY 22: Image released on May 27, A newborn baby in the maternity ward at Frimley Park Hospital in Surrey on May 22, 2020, in Frimley, United Kingdom.

Also known as infantile Krabbe disease or globoid cell leukodystrophy, Krabbe disease is a rare and often fatal condition that affects about one in 100,000 infants. Most children who are Krabbe disease carriers face death before they are two years old.

Krabbe disease falls under lysosomal storage diseases—an umbrella of about 50 rare and hereditary conditions caused by defects in lysosomal functions. Lysosomes are small containers of enzymes in cells. One gene, GALC, is responsible for encoding an enzyme that digests lipids in the body. For Krabbe disease carriers, a mutation in the GALC causes the buildup of lipids, leading to deformed development of the myelin sheath, which coats neurons, impairing nerve cell signaling.

"This disease has no good therapy," said senior author Charles Vite from the University of Pennsylvania's School of Veterinary Medicine. He further explained that they have been examining the disease in dogs since the 1990s, noting that the shift to a novel gene therapy gave them the chance to treat the disease—to a big effect on the nervous system.

An existing Krabbe disease treatment involves a bone marrow transplant within the first month after birth has been found to prevent symptoms in about 30 percent of infants. But the procedure is not without risks, with Vite stressing the need for a new treatment in a press release from the University of Pennsylvania.

Canines that are Krabbe disease carriers are from Penn Vet's Referral Center for Animal Models of Human Genetic Disease, allowing the investigation of new therapies. To start dampening the symptoms of the condition, researchers identified the introduction of a healthy GALC gene to the canine brain as an important part of the procedure.

To achieve the requirement, they used a particular vector, the AAV9 vector, to deliver the healthy GALC gene. The vector in the study was previously used in experimental gene therapies for neurological diseases, noting that it seems to be the best candidate for approval from the Food and Drug Administration (FDA).

Another consideration in the study is the location for gene delivery. Researchers decided to send the gene by injecting it through the spinal fluid located at the back of the head. Vite notes that the spinal fluid offers the optimal delivery route of the gene to the brain.

Canine participants that received that high-dose therapy displayed health myelination in the brain cells. Furthermore, gene therapy also had a positive effect on myelin development, even for parts of the peripheral nervous system.

"That was a huge surprise for us... that injecting a gene therapy in the spinal fluid can positively affect both the central and the peripheral nervous system was really exciting," Vite commented.