The fashion industry has been responsible for microfabric pollution, carbon emissions from textile factories, and other factors harmful to the environment. Roya Aghighi, a Canadian-Iranian designer, collaborated with scientists from the University of British Columbia (UBC) to create textile capable of absorbing carbon gas emissions. 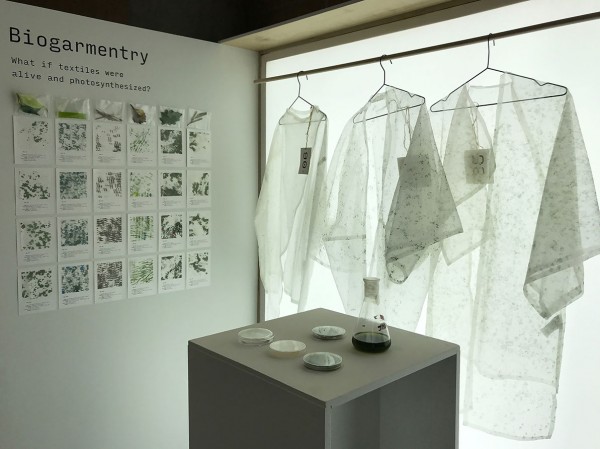 The clothing is alive - comprised of algae that have been biofabricated into a textile that the team has named Biogarmentry. The fabric can also photosynthesize as the prototype designs can be made into fashionable garments resembling cloaks.

According to the United Nations Environment Programme (UNEP), the fashion industry is responsible for up to 10% of all greenhouse gas emissions. The US Environmental Protection Agency reported that American consumers buy the most garments and footwear each year and dispose of up to 70% of clothing and shoes each year, which end up in landfills.

Aghighi believes that change will begin from gaining a new perspective on how people relate to their clothing. Neglectful consumerism should be changed into an emotional and empathetic connection, which keeps the fashion designer inspired to create sustainable clothing.

The biofabric, comprised of Chlamydomonas reinhardtii algae, comes to life with a bit of water and sunlight for photosynthesis. Aghighi hopes that although fashion consumption habits will progress slowly, a positive change may be long-lasting.

Traditionally textile materials such as hemp and cotton absorb carbon as the crops grow. However, explained designer Charlotte McCurdy, natural materials still emit carbon. A single cotton t-shirt may absorb up to 30 pounds of carbon dioxide but most of the gas is emitted during production and dyeing processes in manufacturing.

Other environmental startups in the fashion industry have proposed clothing made of other natural fibers such as bamboo, cactus leather, and beechwood to create 'carbon-negative' brands. However, none of these materials and processes have been able to achieve zero carbon emissions, especially in the process of washing and drying clothes.

McCurdy also explored the idea of algae fashion and designed a raincoat made of marine algae and other biodegradable compounds. As microalgae absorb carbon and photosynthesize, it can be made into a powder to make fiber.

The algae are not going to be used to make a new type of plastic material, explained McCurdy. Algal fabric is meant to sequester carbon.

Carbon-negative fashion may soon be based on fabric derived from algae. Outside of the fashion industry, algal biotechnology has been utilized to replace polyurethane plastics, fabrics, and make biofuel.

Professor Stephen Mayfield from the University of California San Diego designed a biodegradable flip flop from algae-based materials. 'It was clear [that electric vehicles] were the future of transportation and it was just a matter of time. Algae is poised in the same way,' he said.

McCurdy's raincoat was part of her "After Ancient Sunlight' project, which pointed out how society used to fulfill 'all of its needs through the energy of the sun.' Eventually, people became 'dependent on this stored, ancient super-energy-dense sunlight.'

Aghighi's fabric is similar to having a pet, developing different organic patterns as the algae grow. She's imagined people tending to their algae cloaks daily by giving it sufficient water and sunlight while the clothing absorbs carbon.

Check out more news and information on Algae on Science Times.