Mysterious Seed Packets May Be Part of an International 'Brushing' Scam

Selling foreign plants and seeds in the United States via Amazon deliveries has been banned. Authorities have been figuring out why people have been receiving packets of seeds that they did not order. 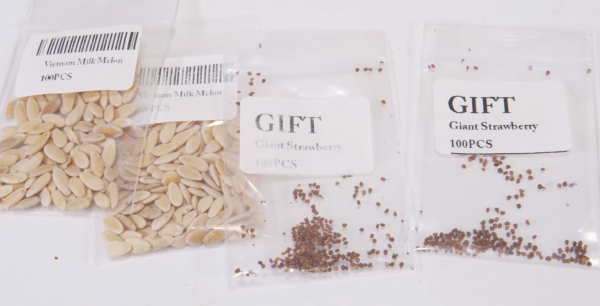 The seeds have postmarks from China and have been delivered all over the world. Investigations by the US Postal Service, Department of Homeland Security, Customs and Border Protection, and Department of Agriculture are still ongoing since the seeds have been labeled as jewelry or toys.

Since July, nearly all U.S. states reported seed deliveries that were not ordered. When they asked Chinese authorities, they responded by saying the postmark labels were not authentic.

Amazon made new guidelines by September 3 to only allow American-based sellers to sell seeds, which does not include non-US residents. Gardeners have also been discouraged from planting the seeds.

According to the USDA, the plants and seeds may be invasive species or cause harm to gardens and farms. 'Mislabeling packages in order to get seeds and other plant materials into the country is agricultural smuggling,' they noted.

Amazon continues to make 'efforts to protect our customers and enhance the customer experience.' Violation of their new online selling guidelines will result in the seller's account being removed. A company spokesperson said, 'Moving forward, we are only permitting the sale of seeds by sellers who are based in the US.'

The seed packets are believed to be part of an international 'brushing' scam for online selling sites to gain positive reviews and boost seller legitimacy. Nearly 14 plant species have been identified such as roses, lavender, and mint.

The same warning has been echoed in several other countries that have received mysterious seed packets. In Scotland last month, local authorities said that planting the seeds may damage the ecosystem.

Gerry Saddler, Scotland's Chief plant health officer said that 'Plants and seeds should always be sourced responsibly from known suppliers.' Those who have received the packets should report to the Science and Advice for Scottish Agriculture or the Animal and Plant Health Agency.

The packages should not be opened, planted, or composted, said Saddler. They 'could be carrying plant pests or diseases that are a harmful risk to our plant life and the environment.'

Jenny Park from Scottish Natural Heritage said that planting mystery seeds, even if the species had been identified and may seem non-threatening, can cause a lot of harm. Rhododendron and giant hogweed were introduced in Scotland as garden plants years ago, she explained. However, their effect on native woodland or along river banks and the cost of removing the invasive non-native species threatened to local biodiversity.

People are also being warned not to open any of the packagings due to possible traces of harmful pesticides. Amazon has yet to confirm if it will extend its new online selling policy in other countries.

Check out more news and information on Amazon Prime on Science Times.