Now that the United States gets to decide its future through electing its leaders, with the right to suffrage, or voting, being one of the rights granted by the Constitution. However, aside from the human rights and civic duty involved, the very act of casting votes can also offer benefits to one's mental health.

From an article published by the University Health Sciences from the University of Wisconsin-Madison last year, it stated that the relationship between voting and health is reciprocal. "Research shows that the healthier you are, the more likely you are to cast a ballot," said Barry Burden, political science professor and Elections Research Center director at UW-Madison. Burden added: "When a person is involved with civic life, they are social, efficacious, and participating." 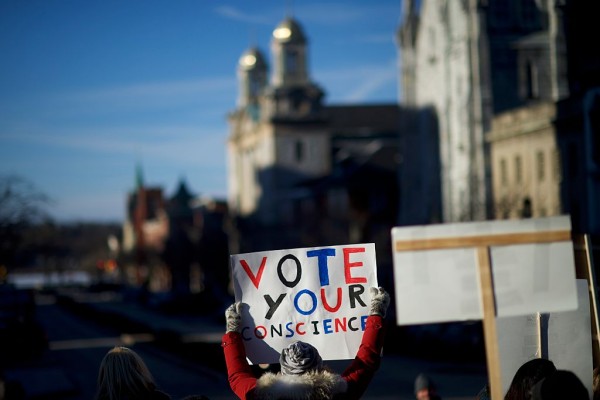 (Photo: Photo by Mark Makela/Getty Images)
HARRISBURG, PA - DECEMBER 19: Donald Trump protestors demonstrate outside the Pennsylvania Capitol Building before electors arrive to cast their votes from the election on December 19, 2016, in Harrisburg, Pennsylvania. Electors from all 50 states cast votes today in their respective state capitols. Donald J. Trump won Pennsylvania by less than 1%, the first Republican to carry the state since George H. W. Bush 1992.

RELATED: An Asteroid Is Moving Towards Earth on Election Day Eve

Here Are Three Benefits of Voting, Supported by Scientific Studies:

People who voted are more likely to be in better health

A 2018 study in the journal Child Development, supported by the Maternal and Child Health Bureau, the Health Resources and Services Administration of the US Department of Health and Human Services, examines the link between civic engagement - either by volunteering, voting, or activism - during stages of late adolescence and early adulthood with socioeconomic status, physical, and mental health in adulthood.

It analyzed data from 9,471 adolescents and young adults from the ages of 11 to 20 years old. Participants were surveyed between 1994 to 1995 and were followed for almost 15 years. When they reached adulthood, follow-up studies showed that those who volunteered or voted in their youth mostly enjoyed better mental health and health behaviors as adults. Activism, on the other hand, was associated with more health-risk behaviors and was not associated with mental health. Civic engagement, in its entirety, was not conclusively associated with physical health.

There could be an election soon. But people living with mental illness can face barriers to voting.

We've made a guide to voter registration and voting for people with a mental illness.

A separate study from 2018, this time published in the journal Cultural Diversity and Ethnic Minority Psychology, observed the effects of activism on minority college students - Black and Latinx - who were enrolled in predominantly white institutions. Researchers analyzed data from the Minority College Cohort Study, which was a long-running longitudinal investigation focused on minority students.

Proponents of the study explained that people experiencing discrimination, mostly racial and ethnic, are subjected to increased levels of stress and anxiety. Others even exhibit signs of depression. However, Black and Latinx who were politically active appeared to be more resilient to such stressors. Furthermore, Black students who started college participating in political activities reported less stress compared at the end of the first year compared to those who did not. While Latinx students did not report the same response, they show resilience against racially-charged microaggressions, relating these activities to less stress in their group.

Using data gathered from a long-running panel survey, Sanders observed that "participation is a resource that alleviates psychological distress," adding that it can offset negative mental health issues related to disadvantages in social status.