As the ills of factory farming become more pronounced, people are increasingly gravitating towards vegetarian or pescatarian diets. Besides producing a large percentage of our total greenhouse gas emissions, raising livestock uses up a third of the world’s arable land to grow feed, not to mention that the animals themselves are often terribly mistreated.

Eating fish, then, seems preferable to meat. In fact, according to the Global Aquaculture Alliance, 3.1 billion people around the world now rely on fish and seafood for a fifth of their daily animal protein intake. Fish are also one of our only sources of long-chain omega-3 fatty acids.

But—spoiler—it turns out there are some serious issues with the seafood industry, too. 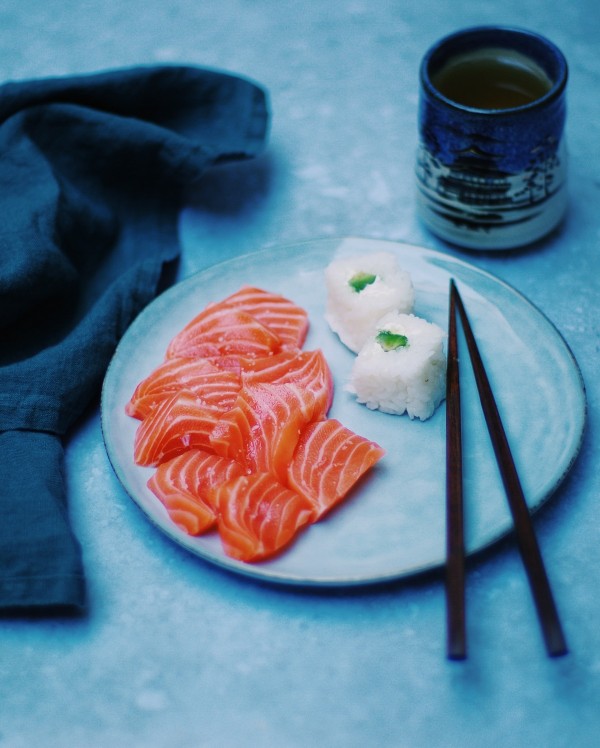 Water temperatures are rising, throwing off marine ecosystems’ natural balance and kicking off negative ripple effects throughout their food chains. Overfishing—when we take fish out of their natural habitat at a rate too fast for them to keep up with in terms of replenishing the supply—has depleted wild populations of halibut, monkfish, tuna, and salmon, among others.

Salmon in particular are one of the most crucial species for the ecosystems they inhabit. Since they’re born in freshwater streams but then migrate to the sea to mature, salmon serve as a link between saltwater and freshwater ecosystems, bringing nutrients from the oceans inland and vice versa. They’re also a key food source for bigger animals like bears and whales.

But mass-producing salmon for human consumption has hurt the species’ wild population. Between the 1970s and today, for example, the number of wild Atlantic salmon out there has been cut in half or maybe more, going from 8 to 10 million to just 3 to 4 million. And salmon farms have a recurring problem with parasites called sea lice (I know—gross), which flourish in densely-packed pens and spread to wild fish when farmed fish escape.

IN CASE YOU MISSED IT: Warm Florida Waters Cause Coral Bleaching & Kill Thousands of Fish

A San Francisco-based startup called Wildtype is developing a product that could one day help alleviate the problems caused by fish farming: the company is devoted to producing lab-grown salmon.

Similar to cultured meat like that made by Memphis Meats, Wildtype’s salmon starts with real animal cells and adds a mixture of nutrients, sugars, salts, amino acids, and growth factor to coax the cells to grow as they naturally would inside an animal’s body. Done right, the process can yield animal tissue that contains muscle, blood, and fat, just like you’d get from a farmed fish. Except in some ways it’s even better, because what you don’t get is mercury, microplastics, and the other contaminants that farmed fish are becoming rife with.

Wildtype created its own technology for the “scaffolds” where tissue grows. “This is applicable to other species than the salmon that we have worked on,” Wildtype co-founder Arye Elfenbein told Tech Crunch. “We basically create a scaffold that provides the right guidance...for cells to take up fats in different places or become more striated.”

The company just opened up a pre-order waiting list for its product to chefs around the country, despite commercial production being up to five years away.

WOW: Dubai's Green Revolution Starts at Its Vertical Farms in the Middle of the Desert

Last year the company did a taste test for employees, investors, and a group of chefs and restaurateurs. While the texture of the fish was apparently realistic, its taste was described as “lacking.” And that’s not the only challenge Wildtype will have to overcome; the company estimated that each spicy salmon roll served at the tasting cost $200 to produce.

This is the biggest issue with lab-grown meat, whether beef, pork, or fish—it’s difficult and costly to scale up its production. Wildtype is aiming to lower its costs to seven to eight dollars a pound within a few years. “The dream vision is the cleanest, purest, freshest salmon, without contaminants or antibiotics, for a price lower than farmed Atlantic salmon,” said cofounder Justin Kolbeck.

It’s likely that one day in the future—maybe distant, maybe not so much—we’ll look back in disbelief at the way we used to raise and slaughter entire animals just to get a few cuts of their flesh. It will seem wasteful and barbaric compared to growing exactly the cuts of meat that we want, with no death or pollution involved. It’s still a ways off, but if companies like Wildtype can make their vision a reality, people, animals, and the planet will all be better off for it.

READ NEXT: Alaska Salmon Grew Smaller Over the Past 60 Years

Vanessa is the senior editor of Singularity Hub. She is interested in renewable energy, health and medicine, international development, and countless other topics. When she's not reading or writing you can usually find her outdoors, in water, or on a plane.