Local authorities in the state of Texas on Saturday have already lifted the water warning against a dangerous brain-eating amoeba in its tap waters - for the entire state except for one community near Houston.

Last Friday, September 25, the Texas Commission on Environmental Quality released a warning to the Brazosport Water Authority that its water system might be potentially tainted with Naegleria fowleri - an amoeba known as a "brain-eating" microbe that is mostly found in bodies of water. 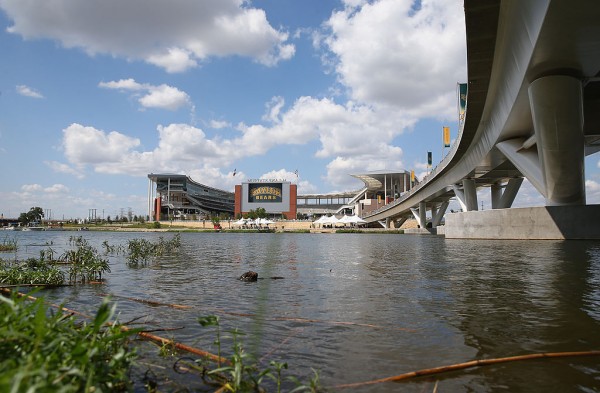 (Photo: Photo by Ronald Martinez/Getty Images)
WACO, TX - AUGUST 31: A general view of McLane Stadium across the Brazos River before a game between the Southern Methodist Mustangs and the Baylor Bears on August 31, 2014, in Waco, Texas.

At first, the water warning covered eight communities in The Lone Star State, advising people not to use their tap water for any purpose except for flushing toilets. By Saturday, September 26, all warnings were lifted aside for Lake Jackson, in Brazoria County. The city, with a population of more than 27,000 north of Houston, houses the Brazosport Water Authority's treatment plant.

CORRECTION: At 10 PM Friday the Brazosport Water Authority was informed of potential Naegleria Fowleri in the water supply.

According to NBC Dallas-Fort Worth (NBCDFW), the advisory was also lifted for two state prisons and Dow Chemical's facilities in Freeport, TX. Furthermore, the advisory over Lake Jackson shall remain until the water system has been thoroughly flushed and free from the dangerous microbe.

The Naegleria fowleri was found in the Lake Jackson city water supply following the death of a 6-year-old boy. The child was hospitalized early this month after contracting the microbe, suspected to be from the neighborhood splash pad, or at a water hose from their home. After dying on September 8, authorities conducted an investigation of the Brazosport Water Authority.

Health experts say that the amoeba is rare, but persons who are infected die 90 to 95 percent of the time.

Water tested by the authorities came from the Brazos River, one of the state's largest rivers and sometimes used as a marker between East and West Texas.

Popularly known as the brain-eating amoeba, naegleria fowleri is technically not an amoeba-like other known species, but is instead classified as a "shapeshifting amoeboflagellate excavate." These are usually found in bodies of water and can enter the water through the nose, traveling through the nasal cavity to the brain.

According to the Centers for Disease Control and Prevention (CDC), a person cannot be infected by drinking water contaminated with the microbe. Also, the brain-eating amoeba has also shown to be incapable of propagating via water vapor or aerosol droplets.

The amoeba can cause a devastating brain infection called primary amebic meningoencephalitis (PAM). According to the Queensland government's information on the disease, symptoms usually appear from three to seven days of infection and include: high fever, severe headache, sleepiness, seizures, and more.

In the United States, infections from the naegleria fowleri are considered rare. The CDC reports that from 2009 to 2018, only 34 cases were reported in the US - 30 of them infected from recreational water, 3 from conducting nasal irrigation with tainted tap water, and one from a backyard slip-n'-slide with contaminated water.