Sundar Pichai, Google CEO, Points to a "Hybrid Model" as the Future of Work

Sundar Pichai said that Google has begun making changes to their offices to support their returning employees after the pandemic, preparing the company for "hybrid models" of work.

Pichai, the 48-year-old tech exec for one of the largest companies in the world, is among this year's Time 100 most influential people in the world. In a video interview, he shared the adjustments Google is making to better support its employees. 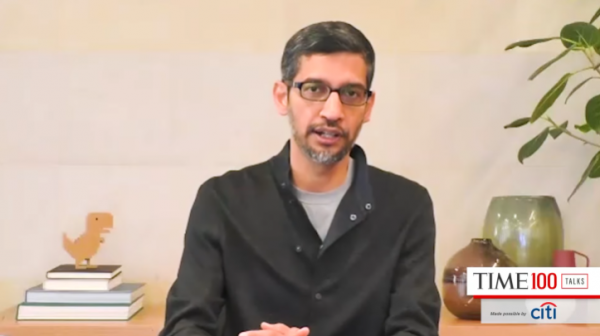 (Photo: TIME YouTube Channel)
Join TIME as we convene members of the 2020 TIME100 list of the 100 most influential people in the world. Featuring conversations with TIME100 honoree Alphabet CEO Sundar Pichai.

Preparing for the Future of Work

"I see the future as definitely being more flexible," Pichai said.

The Google CEO said that they are reconfiguring office spaces for their "on-sites," most likely referring to employees, mostly home-based, who will be reporting to the office. As early as July, Google has announced that it will be extending the work-from-home policy among its employees up to June 2021, is one of the first companies to do so. It first announced a return on July 6, then September, before moving their employees' return to the office to the following year.

According to the Wall Street Journal, Sundar Pichai made the decision partly to support their employees who have children faced with a mostly remote school year.

He explained that as the lockdown started, he realized it to be a "period of tremendous uncertainty," adding that they wanted to adjust and provide certainty where possible. Pichai further explained that they made the decision after realizing that their employees were "trying hard to plan" amidst the pandemic, affecting the company's productivity.

In the face of the changing landscape at Google, the drastic decision seems to have its employee's approval. A recent survey among its employees revealed that about 62 percent of its employees believe that they only need to report to the office "some days" and do their work, while 20 percent, or one in five, believes they don't need to come at all.

Pichai stressed the importance of being together and having a sense of community in their work or solving hard problems or creating something new. He added: "We don't think the future is just 100% remote or something."

Many Googlers will tell you that the thing they love most about work is the PEOPLE. So we were worried about how employees would feel about WFH. It has been an extraordinarily hard year for everyone, but we're seeing some silver linings: pic.twitter.com/vlskiWjo9S — Life at Google (@lifeatgoogle) September 22, 2020

RELATED: Working from Home Might Be Bad for Your Mental Health

Another factor in the Google shift is affordability, especially for its employees in the San Francisco Bay area. According to Business Insider, San Francisco has grown to be the most expensive city in the United States, requiring an annual salary of more than $170,000 just to be able to afford a mortgage in the city.

The Googleplex, which houses the corporate headquarters of both Google and its parent company Alphabet, is located in Mountain View, California. For Bay Area residents, this requires an extended commuting time to and from work.

"It's always made me wonder when I see people commuting two hours and away from their families and friends, on a Friday, you realize they can't have plans," Sundar Pichai said.

Pichai also said that Google has maintained the philosophy that the office should be fun, believing in reducing friction wherever possible, not just for improved productivity, but to improve the lives of their employees.

Check out more news and information on Google in Science Times.