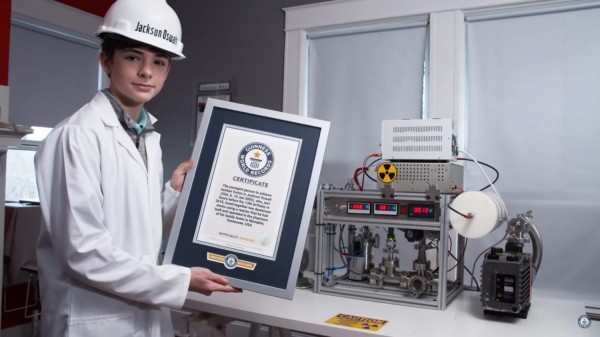 After two years of waiting for confirmation, Jackson Oswalt, now 15 years old, has finally gotten the Guinness World Records announcement as the youngest-ever to make a nuclear fusion reactor at the age of 12.

According to an NPR report, a teenager from Tennessee is the youngest person to have ever achieved nuclear fusion and did it in his family's playroom with parts he ordered online.

Oswalt has waited three years for confirmation from The Open Source Fusor Research Consortium and reasoned that he made nuclear fusion because he does not want to spend his life playing video games.

Making it to the Guinness World Records

Remember Sheldon Cooper from the hit TV series The Big Bang Theory? He is the boy genius from Texas who tried making a nuclear reactor to provide free electricity for his town. Unfortunately, it failed when authorities told him that it was illegal to store Yellowcake uranium in a shed.

According to Guinness World Records, in 2018, Jackson Oswalt made a working, tiny nuclear fusion reactor just hours before his 13th birthday. That makes him the youngest person ever to do it, beating the former world-title record by a full two years. 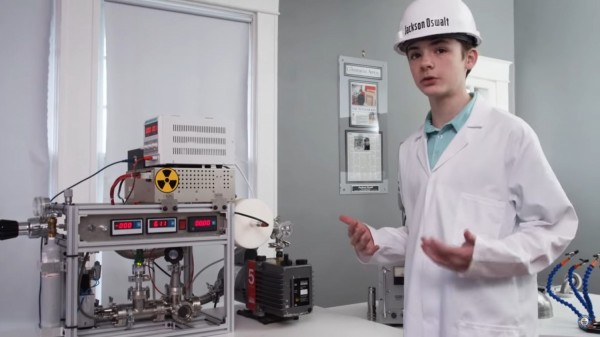 "I've been able to use electricity to accelerate two atoms of deuterium together so they fuse into an atom of helium-3 and also release a neutron, which can be used to heat water and turn a steam engine, which in turn produces electricity," Oswalt from Memphis, Tennessee said.

While introducing his reactor's demo, Oswalt said that he will not be doing full-on fusion but will still be creating plasma within the chamber, Popular Mechanics reports.

"I'd say [the] hardest part was trying to figure out how to make the seal airtight on the chamber, so I spent about probably half a year trying to get the seal correct," he said.

Oswalt has become one of the people listed in the high school (or below) and a comprehensive list of makers of a nuclear fusion reactor. Those people on the list have already won significant accomplishments, from winning in a science fair to getting a college scholarship worth $75,000.

Oswalt joins the running list of "fusioneers" who achieved fusion at their homes. Keeping that list is a fusioneer himself, Richard Hull.

Read Also: Nuclear Fusion and All Its Advantages May Be Achieved, If a New "Tokamak" Design Is Effective

Power from nuclear fusion offers a seemingly inexhaustible source of energy that could last for many generations. But it is now easy to achieve because of the insurmountable engineering challenges it has like reaching a rate of heat by fusion plasma that is more than the rate of energy injected into the plasma.

Fusioneers who managed to achieve nuclear fusion in their homes need to be diligent and intelligent like Oswalt. The 12-year-old boy is just one of the thriving community of homemade fusioneers. Even a college student tried selling his almost ready-to-use fusion reactor to pay for his college tuition fee.

Read More: Project ITER Paves the Way for the Future of Nuclear Energy

Check out more news and information on Nuclear Energy in Science Times.