Technological advances in the field of medicine include developing ways for surgical procedures to become more efficient or reducing the radiation exposure of patients. Two surgeons from Murayama Medical Center in Tokyo, Japan tested smart glasses with an attached device called picoLinker to assist them during spinal surgery.

The findings were recently published in the Journal of Neurosurgery: Spine by Doctor Keitaro Matsukawa and Dr. Yoshiyuki Yato. During procedures, surgeons normally rely on support monitors. However, monitors leave room for errors and technical difficulties.

The study describes a new wearable device that can be attached to glasses, giving the surgeons an alternative screen right in front of his/her eyes. During a fluoroscopically-guided, minimally invasive, spinal instrumental surgery, the device displays monitor data.

Fluoroscopy involves using a continuous X-ray beam to examine a body part. The beam is transmitted to a monitor where the physician can look view the body part in real-time. During traditional spinal surgery procedures, surgeons have to constantly look at the monitor and surgical field when adding screws, plates, or other spinal instrumentation.

In the pilot study, 20 patients were enrolled to undergo spinal surgery. Half of the group underwent a procedure called posterior lumbar interbody fusion where the pair of surgeons used the picoLinker. The other patients underwent spinal surgery under traditional methods of the same procedure and percutaneous pedicle screw technique. 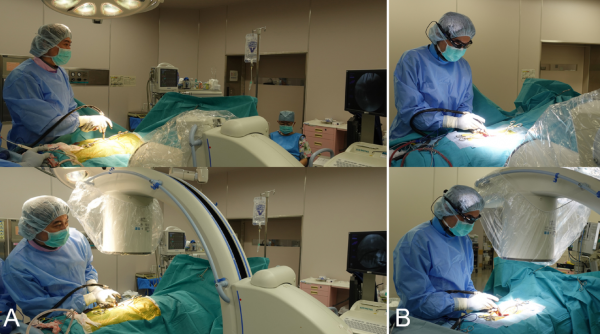 During the procedures, several factors were accounted for such as how many times the surgeon turned his head, estimated blood loss of the patients, exposure to radiation, the accuracy of screw placement, and overall operative time. Procedures done with the fluoroscopic monitor in the smart glasses were significantly efficient in head turn, increasing efficiency. There were no significant differences in radiation exposure and operative time but were slightly longer without the device.

Read Also: Stem Cells for Spinal Disorders - A Nonsurgical, Minimally Invasive Treatment for Neck and Back Pain that Could Change Your Life

Improving the Efficiency of Spinal Surgery

The device significantly helped with creating more space in the operating room as additional surgical equipment, assistants, and numerous monitors consume a lot of space Intraoperative support systems are crucial for minimally invasive procedures, yet are often inconvenient in terms of placement inside the operating room.

During the study, there was only one complication when the surgeon was not wearing the device. A screw perforation occurred on one of the non-glasses group. The device could enhance the concentration and efficiency of surgeons during a procedure, shared the authors.

Doctor Yato and Dr. Masukawa said, "We believe the major advantages are 'concentration' and 'information centralization.' The smart glasses display system used as an alternative screen in front of surgeons' eyes allows them to see both the surgical field and information displayed on monitors simultaneously without moving the eyes and head."

"In addition to fluoroscopic images, a variety of other images, such as those obtained before surgery and those from vital sign monitors, neurophysiological monitors, computer navigation monitors, and endoscopic monitors, can be displayed on the wearable screen. The eyeglass-attached display device can be a great tool to help surgery progress smoothly and safely."

Check out more news and information on Surgery on Science Times.