Google Search, one of the most popular items from Google and its parent company Alphabet Inc, has been improved - with its algorithms now allowing users to hum or whistle the music they're looking for.

On Thursday, October 15, Google announced its "hum to search" feature, which lets you sing, hum, or whistle a tune to the app, and will search for your targeted song online. It works as an upgrade for existing users of the Google app, or the Google Search widget. Just tap the microphone icon and ask "What's this song?" or you can also click the "Search a song" button. Then hum to whistle or sing the tune for 10 to 15 seconds.

The nifty feature also works with Google Assistant: simply ask "Hey Google, what's this song?" and start humming. The tech company announced that this is currently available in English on the iOS platform, and in more than 20 different languages for Android users.

Do you know that song that goes, "da na na na na do do?" We bet Google Search does. Next time a song is stuck in your head, just #HumToSearch into the Google app and we'll identify the song. Perfect pitch not required → https://t.co/xOFYTukjOk #SearchOn pic.twitter.com/3LRN4HJMKG — Google (@Google) October 15, 2020

After the search, including the vocal part, Google's machine learning algorithm looks for potential song matches. In the blog post announcing the new feature, the Mountain View, California tech company assured its users that a perfect pitch is not required to use this feature.

Google explained that the melody of a song is like a fingerprint, being a type of its unique identity. The new "hum to search" employs a technique where the hum input is converted into a numerical sequence that corresponds to the tonal pattern hummed or sung. Their machine learning models then compare it to songs based on different sources - other humans also singing, whistling, or humming or studio recordings. 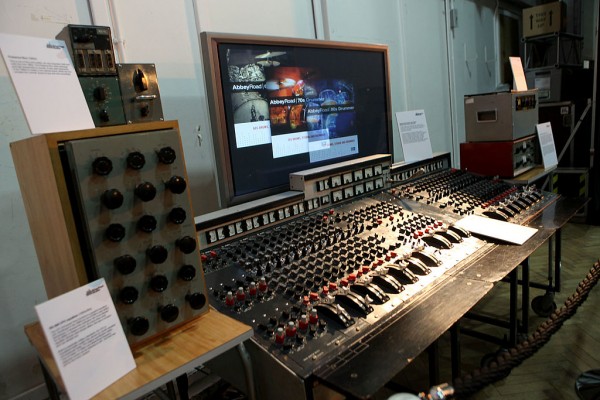 (Photo: Photo by Tim Whitby/Getty Images)
LONDON, ENGLAND - MARCH 09: (EXCLUSIVE COVERAGE) Memorabilia and recording equipment on show in Studio 2 at Abbey Road Studios on March 9, 2012, in London, England. The music recording studio has been opened up to the public for a series of events throughout March as part of their 80th anniversary.

Their algorithms then remove other details from these audio files, extracting the same number-based sequence, stored for future references.

The newest "hum to search" feature builds on the previously-released music recognition technology, developed by its AI Research team. Back in 2017, Google released its Pixel 2 smartphone, which included a deep neural network-based feature to create its SoundSearch - a music search engine. SoundSearch was later integrated into the Google app in 2018, expanding its library to a million-song catalog.

The "hum to search" feature is a promising help, especially for people who especially gets a case of the earworm or a "last song syndrome" - people who get a tune or a line stuck in their head, nagged by the inability to remember the song or listen to the rest of it.

A case study, published in November 2018, reports the case of a 32-year-old female with a persisting history of "musical obsessions" over a twelve-year-period. Her episodes, characterized by repetitively recalling parts of a song, prompts her to compulsive behaviors like looking for and listening to songs matched with the tune she obsesses with.

RELATED: What Song Is This: 4 Music Recognition Apps You Need Today

In 2015, a team including psychologist Lauren Stewart from the University of London and Aarhus University conducted a study on "earworms" - that persisting tune or song stuck in a person's head. While the exact mechanism behind earworms remains murky in some aspects, Stewart's team was able to observe that people are prone to these experiences when the mind is "idle" or at a "low cognitive load" state.

"The idea that we have full control over our thought processes is an illusion," Stewart explained in a statement.

Check out more news and information about Google in Science Times.