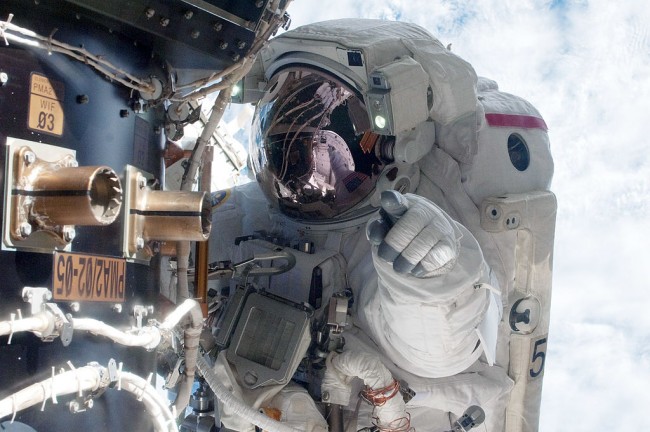 (Photo : NASA via Getty Images) IN SPACE - JULY 12: In this handout image provided by the National Aeronautics and Space Administration (NASA), NASA astronaut Mike Fossum, Expedition 28 flight engineer, waits at an International Space Station's pressurized mating adapter (PMA-2) docked to the space shuttle Atlantis, as the station's robotic system moves the failed pump module (out of frame) over to the spacewalking astronaut and the shuttle's cargo bay during a planned six-and-a-half-hour spacewalk July 12, 2011 in space. This is the 160th spacewalk devoted to station assembly and maintenance since construction began in 1998. Space shuttle Atlantis has embarked on a 12-day mission to the International Space Station where it will deliver the Raffaello multi-purpose logistics module packed with supplies and spare parts. This was the final mission of the space shuttle program, which began on April 12, 1981 with the launch of Colombia.

Astronauts had another long night on deck the International Space Station, as the crew had to contend with several small concerns that were beginning to sound like a broken record.

Many other vital pieces of equipment broke down one after another. They have the bathroom in the Russian portion of the ISS, two crew-generating oxygen devices, and the space station's oven. Everyone is secure, and it is already back up and working. But the poor luck string shows how even a faulty appliance in space is significantly riskier.

A broken toilet situated in the Russian section was the first concern to appear last night. According to the Russian news service Interfax, cosmonaut Anatoly Ivanishin confirmed the problem to ground controllers. They believe the issue is an air bubble developed in the device. A report from AFP shows that the case with the toilet has since been solved.

The cosmonauts may have relieved themselves in a toilet situated in their Soyuz-MS-16 spacecraft, which is currently docked to the ISS, had it not been repaired, however.

Failing that, they should have kindly questioned NASA for keys to the Universal Waste Management Device, the fancy new $23 million bathrooms, which arrived at the ISS earlier this month. If those choices were somehow out, the astronauts should have only worn diapers usually used during spacewalks.

Oxygen supply system down, too?

Later the same evening, a potentially more severe issue arose when the Russian oxygen supply machine broke down again. It had the same problem as last week.

Water used to produce oxygen had run out, but this concern was also resolved, like the bathroom, AFP notes.

The Electron-VM oxygen supply system, housed in the Zvezda module, is one of two on the ISS, the other being NASA's Environmental Protection and Life Support System (ECLSS).

NASA's machine will accommodate a six-member crew, and if things go sideways, there are spare oxygen tanks usable.

And according to AFP, an oven used to warm up food also broke down as if to bring insult to injury. But both the issues were fixed during the night, Russian news agency TASS reported.

Russian space agency spokesman Roscosmos said: "All the station's systems are running properly, the crew's protection and the ISS journey are not at risk."

Another concern on the ISS has finally been located and temporarily fixed: a troublesome air leak that started in September 2019. By studying the trajectory of a floating tea bag inside the Zvezda module, Ivanishin discovered the origins of the leak last week. The temporary patch consisted of silicone rubber and Kapton tape. Astronauts used the same patch for another ISS leak in 2018. Field specialists are focusing on a longer-term approach, says NASA.

Currently, Chief Operating Control Group together with the @Space_Station crew is working out a program of operations to permanently seal the leak location. pic.twitter.com/WC0YyoqgKd — РОСКОСМОС (@roscosmos) October 19, 2020

Ivanishin will not have to struggle with these issues for much longer, along with fellow cosmonaut Ivan Vagner and NASA astronaut Chris Cassidy, as they're expected to return to Earth this week. At 7:32 p.m., the trio will undock from the Poisk module. EDT on Thursday, arriving at Kazakhstan's landing site at 10:55 p.m. ADT. EDT.

It's safe to claim the International Space Station is beginning to reflect its age (the orbital outpost dates back to 1998). When the Russian oxygen supply device collapsed last week, Russian veteran cosmonaut Gennady Padalka said that all Russian modules were 'exhausted' and that, as Ria Novosti noted, they were dependent on expired equipment in desperate need of replacement. With all that's been going on lately at the ISS, he's not wrong.