Nuclear-powered engines have been debated for space travel for a long time. These engines will be more efficient than those of traditional combustion. But the principle failed to materialize because of the dangers of nuclear contamination, faulty reactors, and other technical obstacles. An engine concept, however, has been built by a Seattle-based company that can alleviate the obstacles and helps realize the dreams of completing a journey to Mars in only three months.

A model design for a Nuclear Thermal Propulsion (NTP) engine has been developed by Ultra Safe Nuclear Technologies (USNC-Tech). It is safer and more efficient than previous NTP designs, the firm says. Furthermore, it has better performance than a rocket for chemical combustion. After having support from NASA, USNC-Tech came up with the proposal.

"Our engine maximizes the use of proven technology, eliminates failure modes of previous NTP concepts, and has a specific impulse more than twice that of chemical systems," USNC-Tech's principal engineer Dr Michael Eades said. 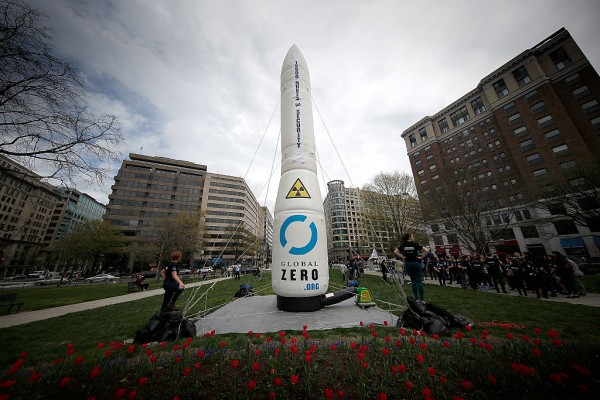 (Photo : Win McNamee/Getty Images)
WASHINGTON, DC - APRIL 01: An inflatable nuclear missile balloon stands at the ready before a protest held by the group Global Zero in McPherson Square April 1, 2016 in Washington, DC. The protest, designed to rally support for the elimination of nuclear weapons, was timed to occur at the same time as world leaders were meeting at the Nuclear Security Summit being held today in Washington.

The liquid fuel propellant that is used in chemical rockets surpassed its potential limit. It will take about nine months to hit the Red Planet if the same motors are used. While several other ideas were suggested earlier, none of them are realistic. Electric propulsion has low thrust and different designs, like anti-matter rockets, are technologically constrained.

Nuclear-powered missiles, though, have still fascinated researchers. Today, to accomplish the aim, UNSC-Tech has proposed a novel solution. The firm uses a Completely Ceramic Micro-encapsulated (FCM) fuel for the reactor.

It is based on a reprocessed variant of nuclear material, High-Assay Low Enriched Uranium (HALEU). In this scenario, the uranium used for power production in nuclear reactors is enriched by up to 20 percent. The fuel is then packed into coated fragments of zirconium carbide.

That way, the fuel can work at high temperatures and is more efficient. Therefore, it would be better for the appropriate reactor and will have high thrust. More specifically, utilizing the new processing facilities, the fuel can be processed.

USNC-Tech claims that, if improved, their NTP architecture might help dramatically reduce the period of exploration. For such an engine, it would take just three months for a crewed Mars flight. In addition to space exploration, such preparation may be used for quick orbital logistics.

Such a concept would be useful as NASA is planning a crewed mission to Mars by 2024. NASA is currently building the Space Launch System (SLS) to carry humanity back to the Moon by 2024. A launchpad platform from where another rocket to Mars might take off would be set up on the Moon.

The most powerful rocket ever designed will be the SLS. Elon Musk's SpaceX is developing a more capable missile as well. Called Starship, it plans to transport a team to Mars by 2024. However, chemical combustion engines that are less powerful than nuclear rockets would be utilized on both the SLS and the Starship.

Check out more news and information about Space in Science Times.