NASA has recently awarded a total of $370 million to 14 companies in different areas, in support of the agency's upcoming space missions to the Moon under the Artemis project.

The awarded contracts are from the agency's fifth competitive Tipping Point solicitation, optimizing its existing public-private partnerships to advance its programs.

Today we announced the selection of 14 U.S. companies as partners to mature space technologies in the areas of cryogenic fluid management, lunar surface innovations, and precision landing testing capabilities. 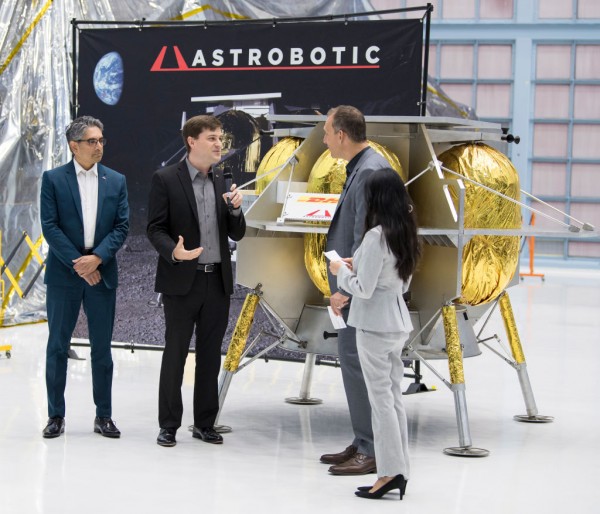 (Photo: Photo by Aubrey Gemignani-NASA/Getty Images)
GREENBELT, MARYLAND - MAY 31: In this handout provided by the National Aeronautics and Space Administration (NASA), NASA Associate Administrator, Science Mission Directorate, Thomas Zurbuchen, second from right, speaks to Astrobotic CEO, John Thornton, second from left, and Astrobotic Mission Director, Sharad Bhaskaran, left, about their lunar lander, May 31, 2019, at Goddard Space Flight Center in Maryland. Astrobotic is one of the recipients of the new series of contracts awarded by NASA for future Artemis missions.

The largest contract, according to the breakdown presented by NASA in its press release, was awarded to Lockheed Martin, to the tune of $89.7 million. The North Bethesda, Maryland-headquartered aerospace and defense contractor is tasked to conduct an "in-space demonstration mission using liquid hydrogen," with the material being described as the most challenging among the cryogenic propellants.

Lockheed Martin is also expected to use their liquid hydrogen research to develop and test management technologies for the fuel with future space missions in mind. It is followed by the United Launch Alliance (ULA), set to use its Vulcan Centaur lift-launch vehicle for a smart propulsion system using a mix of liquid hydrogen and oxygen.

Investments in Communication, Power, and Safety

Other awardees of the recent tranche of NASA five-year projects include Nokia of America Corporation. The communications manufacturer has proposed to deploy what would be the first communications system based on Long Term Evolution (LTE) and 4G technology, receiving a $14.1 million award from NASA. Based on existing terrestrial communication tech, Nokia seeks to deploy the same protocols to support future communications on the lunar systems - requiring greater transfer speeds over greater distances, with more reliability than existing technologies.

RELATED: Led by Samsung and Apple: Is UWB The Next Big Smartphone Tech?

Potentially revolutionizing the power source attachments of future spacecraft, Masten Space System is set to work on a $2.8 million project that will demonstrate the potential of a "universal chemical heat and an electrical power source." If successful, it would allow payloads like rovers and landers to survive the extreme environments - like lunar nights, or the side of the moon not facing the sun - most likely awaiting astronauts on the Moon's surface.

On the other hand, the Astrobotic Technology of Pittsburgh is set to develop a fast and wireless charging system. Awarded a $5.8 million contract, the Pennsylvania-based space robotics firm will also create flight units that might be integrated on commercial robotic landers.

NASA has also announced that its Space Technology Mission Directorate (STMD) is set to meet with the companies and negotiate for the generation of "milestone-based firm-fixed-price contracts" that would extend its respective contracts for up to five years.

Check out more news and information about NASA in Science Times.