A rare kilonova explosion, in which two neutron stars appear to have fused to create a larger neutron star called a magnetar, was observed by astronomers investigating short-lived gamma-ray bursts (GRBs).

Wen-fai Fong, an astrophysicist at the University of Northwestern, USA, has been researching these brief gamma-ray bursts for a decade now. "When you think you understood them, they throw a new twist at you. The Universe produces such a diversity of explosions," the expert said. 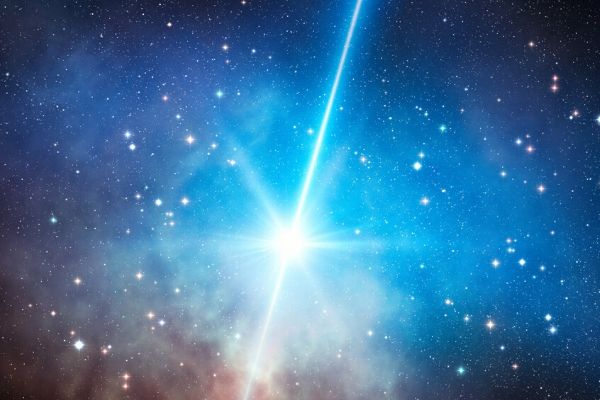 (Photo : http://cdn.sci-news.com)
Immense bursts of gamma rays are created by the orbit of binary stars. These GRBs are so powerful that it can be detected light-years away. It seems GRBs can only be created in perfect conditions that enable it to happen.

What Is Short GRB?

Short GRBs are brief gamma-ray bursts, heralding thrilling occurrences in faraway galaxies. According to Fong, experts assume that they come from the fusion of two neutron stars.

As the name implies, Fong said GRBs happen instantly: there and gone in the span of a few seconds. But an afterglow of anything from X-rays to radio and infrared emissions will accompany them.

That means it's all hands on deck to switch as many kinds of astronomical instruments on it as possible when a short GRB is detected, until the afterglow fades. 'It's a fast-fading signal,' says Fong. The burst disappears from the time you eat lunch to the time you eat dinner," (though normally there's always time for a few days to research it)."

If you wanted to make a smoothie and failed to put the lid on the blender, Fong compares it to what might happen, except in this case, it's bits of neutron star that get blown out all over the place.

Can They Explain The New GRB?

These neutrons easily coalesce into unstable isotopes of heavy elements, which then rapidly decay into more stable ones, releasing in the process heat, light, X-rays, and radio waves. But there was something that did not suit the model for a short GRB detected on 22 May (called GRB 200522A).

Three and a half days after the GRB, when the Hubble Space Telescope was free to pause other observations and turn toward the source of GRB 200522A, astronomers noticed that it released ten times more infrared light than a typical kilonova. It just didn't line up, considering what we know about the radio and X-rays from this blast," says Fong."

Her team gradually realized they had seen something truly odd.

Neutron star mergers usually create black holes. Her team could come up with the only reason that they had witnessed the birth of a magnetar because of how such a merger could create an afterglow ten times too bright in the infrared.

Magnetars are neutron stars with magnetic fields that are incredibly high. As it rotated rapidly after the collision that formed it the field of this magnetar would transfer energy to the debris produced by the explosion of kilonova, heating it up and causing it to glow in exactly the way the Hubble observed.

That's exciting enough in itself. But while GRB 200522A is far far away in a galaxy, the finding is important to our lives here on Earth as well.

Scientists once believed that what produced elements heavier than iron, many of which later made their way into planets, was the nuclear reactions in supernova explosions.

But this hypothesis is passé. Now, scientists think, if you have a gold ring, the chances are that the atoms have been forged out of a long-ago kilonova in a brief blast. Fong says, "We believe a lot of our heavy elements come from these mergers of neutron stars."

The launch of NASA's James Webb Space Telescope in October 2021 will be the next step. She says the tool will be sensitive enough that if there is another burst like GRB 200522A. Not only will it be able to observe its afterglow, but it will also be able to obtain a spectrum of it, picking out the unique elements generated in the kilonova.

In the meantime, Fong's team's report is expected to be published in The Astrophysical Journal and available now on arXiv pre-print.