When a vaccine for COVID-19 is approved for use, one of the next foremost challenges will be distributing billions of doses all over the world, including remote areas with no reliable electricity, where the vaccine needs to stay refrigerated to retain its efficacy.

As part of the preparation, the United Nations International Children's Emergency Fund has mapped out a network of refrigerators and cold storage rooms across the developing countries and helping them set up new equipments in place.

Specifically, UNICEF included tens of thousands of refrigerators running on solar energy. Other groups, including the International Rescue Committee, focus on preparing healthcare professionals to administer the vaccines.

According to Dr. Mesfin Teklu Tessema, who's leading the health unit for the IRC, "For a situation of this size," where so many nations need to launch a vaccine simultaneously for so many people, "it's a huge undertaking." The doctor added, too, that, unless everyone is protected, nobody's safe. 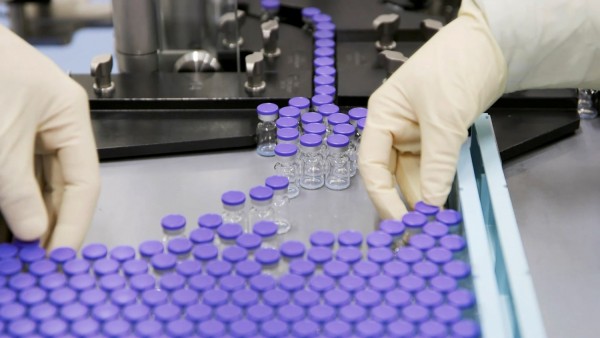 (Photo : Pfizer/Handout via REUTERS)
Vials of COVID-19 vaccine candidate BNT162b2 are sorted at a Pfizer facility in Puurs, Belgium in an undated still image from video.

UNICEF, the UN agency that offers humanitarian support to children worldwide, started to plan for the challenge early in the COVID-19 crisis.

A cold-chain specialist at UNICEF, Michelle Seidel, said, when the first signals of the emergency began, "We already started mobilizing and preparing," as they knew that they would be playing a vital role in this pandemic.

Since UNICEF takes care of childhood immunizations in places such as sub-Saharan Africa, it has already in place a distribution network for vaccines. More so, the organization has spent years working for the improvement of distribution, including the challenge of the manner of keeping vaccines cold.

Essentially, the "cold chain" involves the maintenance of low temperatures at every step of the journey. Meaning, doses of vaccines are set for travel on flights to a nation, where the government is likely to have them distributed to a "national cold storage facility." Following this, the vaccines will then go on to be delivered to other distribution channels and clinics.

65,000 Solar Fridges Expected to Be in Place

While they are being moved, the vaccines are frequently preserved in insulated boxes with ice and sensors. While in storage, a piece of the solution is refrigeration tech running on solar power.

The said solar power has the ability to fill a gap in places that do not have access to reliable electric power. In South Sudan, for instance, which is considered the "least electrified country in the world" where only roughly 28 percent of the population is connected to the grid where it is typical for temperatures to surge higher than 100 degrees Fahrenheit, solar fridges were installed by UNICEF in over 700 health facilities.

Furthermore, thousands of solar fridges more have been installed as well, in other low-income nations. By the end of 2020, the organization is expecting to have more around 65,000 solar fridges installed globally.

The technology to keep the vaccine cool and safe to use continues to evolve. Early solar fridges reportedly had batteries to store current from solar panels. Unfortunately, reports on this development said, such a process did not take effect.

Seidel said batteries were relatively "a weak link" that they became the main reason for failure. More so, the specialist added, they often discovered that "they were not replaced when they broke down."

There may have been a concrete plan for solar-powered fridges to guarantee the safety of the COVID-19 vaccines. However, one of the biggest challenges at present, Seidel said, is attempting to plan infrastructure without them knowing which vaccine or vaccines would eventually be approved and how fast they would be manufactured.

"At the moment," Seidel explained, they are working with numerous vaccine candidates, "and we're very unsure about the quantities that are coming" from such candidates, not to mention the temperature ranges they could be stored at.

This, the specialist added, makes planning remarkably hard "from a supply chain and cold-chain point of view." Working with that kind of uncertainty, she added, is quite a struggle.

Therefore, Seidel continued, there is a need for them to develop scenarios and plan several other scenarios in order for them to be ready.

Check out more news and information on COVID-19 and Vaccine Safety on Science Times.