A new study recently found that big bumblebees are taking time to learn the locations or sites of the best flowers. Smaller bumblebees, on the other hand, the said research showed, which have "a shorter fight range and less carrying capability," are not paying attention to flowers that have the richest nectar.

Scientists at the University of Exeter investigated the "learning flights" that most bees, specifically bumblebees, perform after leaving flowers.

According to East Lothian Courier, honeybees are famous for performing such flights. This particular research presents that bumblebees are doing the same thing, repeatedly looking back to memorize the location of a flower. 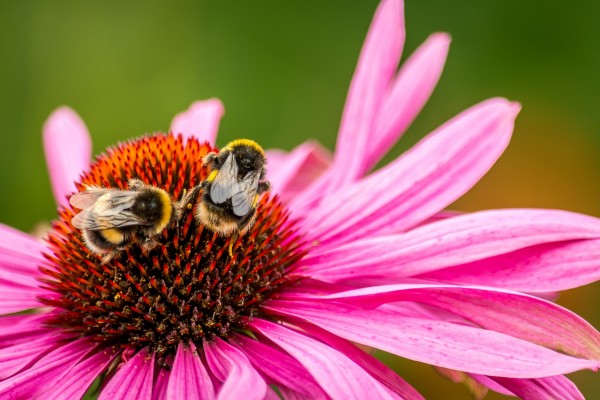 According to Professor Natalie Hempel de Ibarra, it might be generally known that pollinating insects discover and develop distinctive preferences of flowers, although bumblebees are, in fact, selective.

"On leaving a flower," the professor added, they can actively decide the amount of effort to exert into remembering its site or location.

The astonishing study finding is that a bee's size determines this "decision-making," not to mention the learning behavior.

As indicated in this new study, the captive bees visited artificial flowers that contained sucrose solution of changing concentrations.

The bigger the bee's size, the study authors found, the more the insects' learning behavior varied according to the richness of the sucrose solution.

Determining the Differences Between Smaller and Larger Bees

Smaller bees invested a similar degree of effort in learning the artificial flowers' sites, regardless of whether there is a high or low sucrose concentration.

Professor De Ibarra explained the differences the study authors found to reflect the various functions of bees in their colonies.

"Large bumblebees," she continued, can carry larger loads and discover further from the nest compared to the smaller ones.

Smaller ones with a smaller range and capacity to carry, the professor explained, cannot afford to be equally selective, so they accept a greater range of flowers.

These small bees tend to get involved with functions inside their nest, only going out to feed if food supplies in the colony are starting to run low.

How Bumblebees Typically Get Food

Essentially, Bumblebees are not storing food so they can endure the winter season. The small amount of food they stock on is saved for the larvae's feeding.

Like their relative insects, the honeybees and bumblebees feed on nectar to collect pollen for their young's feeding.

Similar to the social wasps, the bumblebees are likely to die off, usually at the end of the summer season. The new queens will then search for someplace where they can hibernate during the winter season, typically underground, and appear to discover new nesting ground, ready to begin a brand-new colony in spring.

The new paper entitled, "Small and large bumblebees invest differently when learning about flowers," came out in the Current Biology journal.

Check out more news and information on Bumblebees on Science Times.