Intuitive Machines has confirmed that it has chosen SpaceX to fly its IM-2 lunar lander project no sooner than 2022 on a Falcon 9 launcher. IM-2 would land in the moon's southern polar area carrying payloads arranged in October via the government's Commercial Lunar Payload Services (CLPS) scheme. 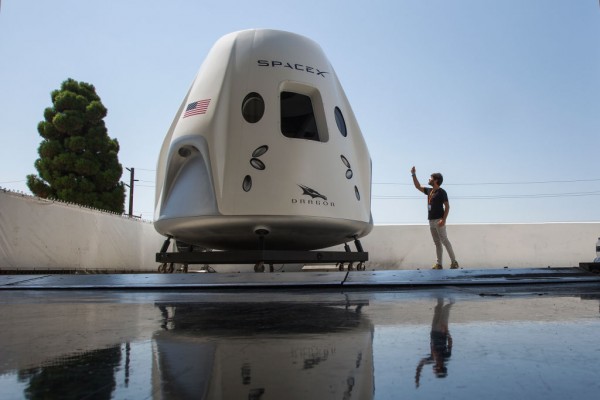 (Photo : David McNew/Getty Images)
HAWTHORNE, CA - AUGUST 13: A reporter takes a smart phone photo of a mock up of the Crew Dragon spacecraft during a media tour of SpaceX headquarters and rocket factory on August 13, 2018 in Hawthorne, California.

A drilling project dubbed Polar Resources Ice Mining Experiment 1 (PRIME-1) will be carried out by the IM-2 spacecraft, which will search for water ice below the lunar floor. Intuitive Machines further said two other NASA hardware payloads would fly on the lander, in addition to the PRIME-1 drill.

Intuitive Machines also chose SpaceX for its first lander flight, IM-1. The spacecraft is expected to be deployed as one of the first two CLPS lander missions later this year. Astronauts would use a lander configuration named Nova-C for both missions.

Steve Altemus, president and chief executive of Intuitive Machines, said in a statement that IM is committed to sticking the landing in back-to-back moon missions by launching Nova-C on a spacecraft. He said he made a promise to NASA and its clients, too.

One of three firms that have won NASA CLPS awards so far is Intuitive Machines. In August, Masten Space Systems, which earned a CLPS lander mission to the moon's south polar area in April 2020, picked SpaceX to launch its XL-1 lander.

For the inaugural flight of the Vulcan Centaur of the Unified Launch Alliance at the end of 2021, Astrobotic, which received an original CLPS award alongside Intuitive Machines in May 2019, will fly the mission.

In June, Astrobotic received a CLPS award for deploying NASA's VIPER lunar rover to the moon's south pole in late 2023, but the agency did not announce the launch vehicle for that mission.

MethaneSAT, an affiliate of the Environmental Protection Fund (EDF), announced in a separate statement that it would launch its eponymous Falcon 9 satellite in October 2022.

According to mission spokesperson Jon Coifman, the spacecraft would launch via the SpaceX smallsat rideshare network.

Masten said at the moment that its SpaceX deal would not cover a particular launch vehicle but rather a facility on the company's preferred timeline to bring the spacecraft to the moon.

Steven Hamburg, co-lead of the MethaneSAT team, said per Space.com that SpaceX provides the preparation and efficiency we need to deliver our instrument into orbit and start streaming emissions data as soon as possible.

The EDF obtained a $100 million grant from the Bezos Earth Fund on Nov. 16, which the group would use to complete and begin MethaneSAT operations. Jeff Bezos, the creator of Amazon and launch vehicle business Blue Origin, founded the project, which aims to invest $10 million in climate change measures.