Experts have agreed that it's no longer surprising that new variants have already emerged in the United States. However, they emphasized that the unchecked transmission of the virus offers abundant opportunities for it to mutate.

NBC News recently reported that almost one year into this global health crisis, the virus has spread at record high rates in the US, and with it, new strains of the virus are emerging.

The most ideal way, thus, to crack down on new strains, said Oregon Health and Science University research professor Ben Bimber, is to stop the virus from spreading.

Each time the virus duplicates, he explained, "it is an opportunity to mutate." 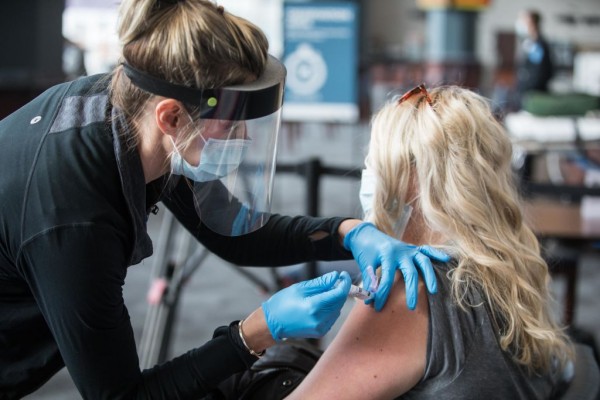 (Photo : Scott Eisen/Getty Images)
An Expert said vaccination is the key to both variants to prevent them from spreading, and reduce the odds of new strains emerging.

When the virus is infecting a person, it penetrates the cells and duplicates itself. More so, Bimber explained, every time the virus is copying itself, there is a chance of introducing errors. Furthermore, the expert continued, if the infection replicates in people, it is will slowly mount up mutations.

Frequently, these mutations or errors, said Bimber, are meaningless. However, in certain circumstances, they may give coronavirus a survival advantage, "making it more contagious," for instance, or more resistant to vaccines or other forms of treatment.

Some mutations, on the other hand, can render the infection weaker. It is not clear how the two strains detected recently in Ohio will impact how the virus behaves.

The said study results on the new strains were posted on BioRxiv, an online preprint server. This means such findings have not yet been peer-reviewed.

In this particular research, the study authors examined genetic sequences of over 220 coronavirus samples collected in the Columbus area from April last year through early this month.

During the media briefing on Wednesday, Dr. Dan Jones, the division of molecular pathology vice chair at the Ohio State University Wexner Medical Center said, one of the variants detected in Ohio has a mutation on the spike protein of the virus identified as the N501Y variant. This is the same mutation discovered in the more contagious strain in the UK and in the South African variant.

The variant did not come from someone abroad. Instead, by examining other small changes in the genetic code of the variants, the study investigators were able to detect that it occurred independently in the US.

Harvard TH Chan School of Public Health's epidemiology associate professor, William Hanage said, he was not surprised by the discovery of new strains, specifically "the one with the N501Y mutation" due to the "fact that it has happened so many times." On top of emerging in the UK and South Africa, the specific mutation has been detected in Brazil, as well.

Meanwhile, according to the researchers, the other variant had a combination of three mutations that have not been observed together in the past.

While the N501Y mutation was found only in one sample, this variant with three mutations swiftly became predominant in the samples the scientists tested last month and early this month.

Jones said, vaccination is the key to both variants to prevent them from spreading and reduce the odds of new strains emerging.

The larger the pool of vulnerable patients, he said, the more probability for a mutation to survive and emerge, he explained.

It has to transmit from one person to another, the expert elaborated, so, "if you are not getting a lot of infection in the population because of the vaccine," then even an essential mutation may "just peter out" since the person infected does not transmit the virus to anybody else.