Why Do Astronauts Leave This One Place in The ISS Filthy?

Astronauts aboard the International Space Station (ISS) need to always maintain the cleanliness inside the spacecraft to avoid contamination because living in space is hazardous. Everything should be squeaky clean that is why astronauts have their schedule of cleaning the spacecraft.

They clean every Saturday by wiping down surfaces, vacuuming, and collecting the trash. It is of high importance that ant-bacterial measures are followed because bacteria could build-up in the constantly-recycled air inside the ISS.

However, there is one spot in the ISS that they keep dirty for a science experiment.

One of the most important tasks that astronauts must follow when aboard the ISS is to wipe surfaces with antibacterial material because bacteria might build up in the ISS, according to Slash Gear. Cleaning is a crucial part of their lifestyle when in ISS to avoid illness-causing microorganisms from settling and growing in the spacecraft and microgravity.

But in one spot of the ISS, astronauts leave it dirty to observe how microorganisms can survive on surfaces in microgravity conditions. This experiment is called the MatISS experiment or the Microbial Aerosol Tethering on Innovative Surfaces in the International Space Station. 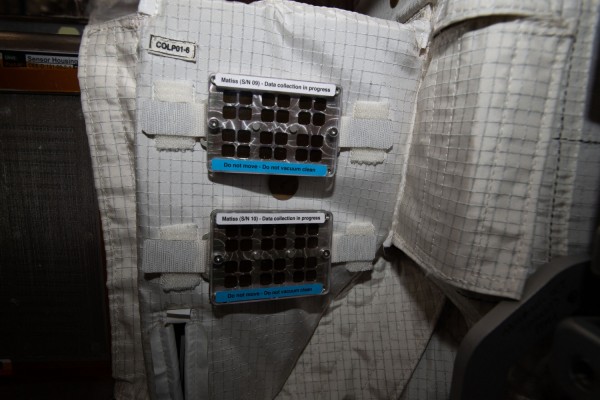 (Photo : ESA)
Matiss or Microbial Aerosol Tethering on Innovative Surfaces in the international Space Station, driven by French space agency CNES, in collaboration ENS de Lyon and CEA-Leti, and commissioned in 2016 by ESA astronaut Thomas Pesquet, examines the performance of five advanced materials in preventing illness-causing microorganisms from settling and growing in microgravity.

It tests out five advanced materials to know how well they prevent bacteria from growing in microgravity. MatISS experiment also gives astronauts insights into how biofilms attach to surfaces in microgravity. It started in 2016, sponsored by the French space agency CNES, and has three iterations used in the ISS.

According to Universe Today, the first iteration is MatISS-1, which serves as the baseline data points for scientists when they return to Earth. It had four sample holders and stayed on for six months in different locations in the European Columbus laboratory module.

Meanwhile, the second iteration is the MatISS-2, which had four identical sample holders that contain three different types of materials but are installed in a single location in Columbus, unlike the MatISS-1. Later on, it was upgraded to MatISSS-2.5 to study how contamination spreads across hydrophobic surfaces using patterned samples.

MatISS-2.5 was conducted for a year and its samples were currently sent back to Earth to undergo analysis. The samples are made up of diverse advanced materials that stop bacteria from sticking and growing in large surface areas, which essentially makes it easier to clean. These materials are ceramic polymers, green polymers, self-assembly monolayers, water-repellent hybrid silica.

According to ESA, "understanding the effectiveness and potential use of these materials will be essential to the design of future spacecraft, especially those carrying humans father out in space."

Through the MatISS experiment, astronauts hope to figure out which materials best works against bacteria build-up because long-duration human space missions needs solutions to limit biocontamination of astronaut habitats.

READ MORE: Top Strange Experiments in Space Made by Humans