For the last three decades, up to 25 percent of all bee species are said to have fallen off international global data, despite a major rise in the number of such records that exist.

According to Independent News, roughly 20,000 species of bee are "known to science, but analysis of a detailed international data set" proposes approximately 5,000 of these bee species "have not been seen since 1990."

Researchers said the absence of bees might not necessarily mean they are completely extinct, although it signifies a severe collapse in thousands of populations. This means that species have become very rare.

The study's lead author, Eduardo Zattara of the Argentina-based Institute for Research and Biodiversity and a National University of Comahue biologist, said that with citizen science and the ability for data sharing, records are increasing exponentially. However, the number of reported species in these particular records is declining.

ALSO READ: Bees: What Do We Really Know? 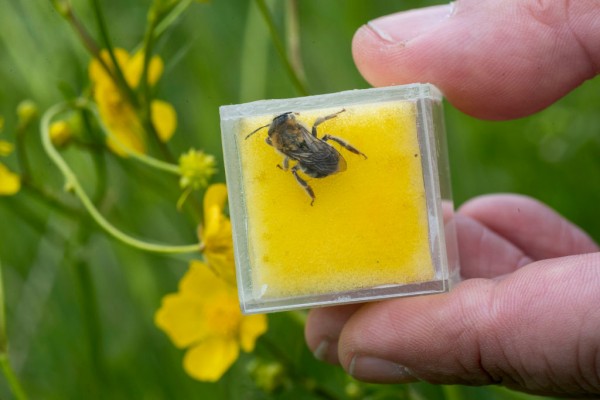 (Photo : Thomas Lohnes/Getty Images)
Andreas Haselboeck from the State Museum of National History Stuttgart holds a honeybee while he is monitoring insects at a meadow in the southwest German state of Baden-Wuerttemberg on May 6, 2019 in Sinsheim, Germany.

Declining populations of bees have been widely reported in different countries globally, although according to researchers, previous research has tended to concentrate on a specific location or particular bee species.

This research, though, intended to determine general, worldwide trends in the diversity of bees. Dr. Zattara said, finding out which species "are living where and how each population is doing" through the use of complex aggregated datasets "can be very messy."

The lead author added that they wanted to ask a simpler question of which "species have been recorded in any place in the world, "in a given period?"

To get an answer, the study authors pored over the Global Biodiversity Information Facility or GBIF, an international linkage of the database containing more than 300 years' worth of records coming from universities, museums, and private individuals, which, together hold the record on the approximately 20,000 identified bee species from all over the world.

An Occurrence to Happen Locally, Currently Going on Globally

On top of searching for a quarter of the total species of bees that are not being recorded anymore, the study authors also observed the drop is not equally distributed among bee families.

In addition to finding a quarter of total bee species are no longer being recorded, the researchers observed the decline is not evenly distributed among bee families.

Essentially, records of the second most common bee family known as halictid bees, have dropped by 17 percent since the 1990s.

Records for a much rarer bee family, the melittidae bees, on the other hand, have declined by as much as 41 percent.

Dr. Zattara said it is essential to remember that 'bee' does not only refer to honeybees even though they are the "most cultivated species."

The biologist added, the footprint of the society is impacting wild bees too, which provides the ecosystem services humans are dependent on.

The team warned that even though their research offers a close look at the bee diversity's worldwide status, it is too general an evaluation to make any particular claims on the present status of individual species.

It is not "really how certain the numbers are here," explained Zattara adding, it is about confirming what has been shown to occur locally is going on globally.