Bandages, which have long been used to cover wounds, have now been upgraded to detect and prevent infections, thanks to nanotechnology.

The group of Daniel Roxbury, an assistant professor at the University of Rhode Island, and Mohammad Moein Safaee, a former URI graduate student, together with URI Ph.D. student Mitchell Gravelly has developed a non-invasive way of both detecting and monitoring infection possibilities in a wound. They embedded nanosensors within the bandage fibers, reporting the details in the journal Advanced Functional Materials. 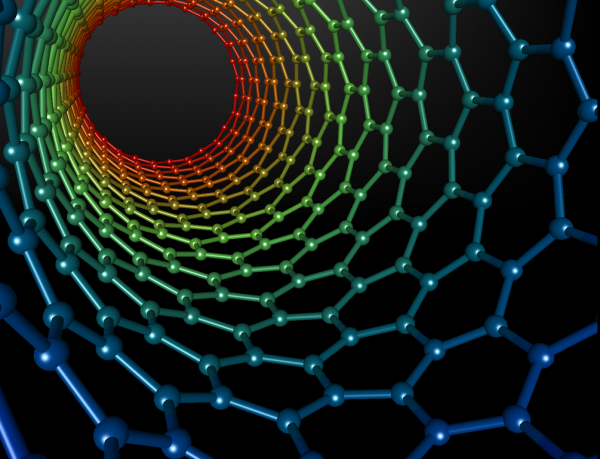 (Photo: Mstroeck at English Wikipedia)
The view from inside a carbon nanotube. Created by Michael Ströck on February 1, 2006.

"We designed and optimized a microfabrication process to precisely place nanosensors inside the individual fibers of a textile," Safee shared in a local news report.

"Single-walled carbon nanotubes within the bandage will be able to identify an infection in the wound by detecting concentrations of hydrogen peroxide," Roxbury explains in a statement. The challenge in using nanotubes for similar applications has been in making them immobile and more biocompatible while keeping them responsive. With their new material, Roxbury adds that the microfibers that house the carbon nanotube accomplish both tasks. The carbon nanomaterial no longer leaches or drains from the fibers yet remains sensitive to the wounds' hydrogen peroxide levels.

Together with the smart bandage, the new wound monitoring technology will be paired with a miniature wearable device, which will wirelessly detect the signal emitted by the carbon nanotubes in the bandage. In turn, this signal is transmitted to an electronic gadget like a smartphone that sends the appropriate prompt to the patient or the health care provider.

Roxbury clarified that the device would "solely be used for diagnostic purposes," expressing hope that the device could detect infection during its early stages, reducing the need for fewer antibiotics and more medical operations like amputations. He specifically noted cases of diabetic patients, which has a routine requirement of chronic wound management.

"We designed and optimized a microfabrication process to precisely place nanosensors inside the individual fibers of a textile," Safaee said. Researchers used cutting edge microscope setups to analyze the structure of the materials they fabricated. Safaee also shared using a "home-built, near-infrared spectrometer" to optimize the textiles' optical features better.

The next phase of their study will involve checking the bandages' response in a petri dish containing live cultured cells of microorganisms found in wounds. Cultured fibroblasts and macrophages, or white blood cells, - cells that create hydrogen peroxide in the presence of pathogens. After this stage, they are looking to move into "in vivo" testing in mice, at which point they will most likely enlist the help of a specialist in studying animal wound models. Although testing has been limited to minute bandage samples, researchers said that the technology is easily scalable to larger bandages. Roxbury noted that "there really is no limitation" size-wise, stressing that its benefits are more appreciated in larger applications. Additionally, while larger bandages might require more removal and reapplication, the smart bandage won't need to.

Check out more news and information on Carbon Nanotubes in Science Times.