A group of scientists from the Korea Advanced Institute of Science and Technology (KAIST) has engineered a tiny brain implant that can be recharged outside of the body. The person can use their smartphone to control the brain circuits for long periods without replacing the battery.

Science Daily reported that this new device is made of ultra-soft and bio-compliant polymers that provide compatibility with the brain tissue. It also comes with LEDs of the same size as the grain of salt, mounted on ultra-thin probes to manipulate target neurons in the deep brain using the light.

This device is an upgraded version of the first or that was developed in 2019 by study author Professor Jae-Woong Jeong. They published their study in Nature Communications. 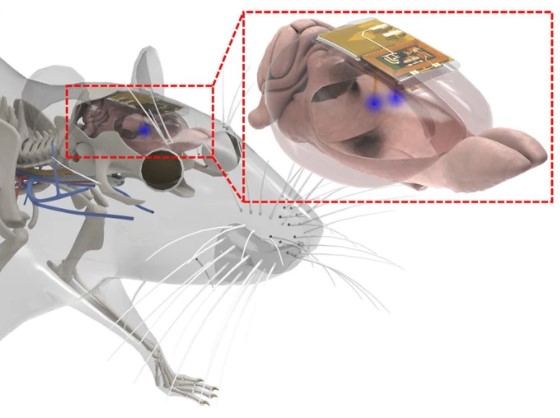 (Photo: Nature Communications)
Conceptual illustration of a wireless optoelectronic probe system subcutaneously implanted in a rodent head for control of neural circuits deep in the brain. The inset highlights the conformal integration of the device with a rat brain. Screenshot from Nature Communications/ Soft subdermal implant capable of wireless battery charging and programmable controls for optogenetics applications by Choong Yeon Kim et al.

The new wireless charging technology addresses the limitations of brain implants. Some wireless brain implants are becoming popular as they are alternatives to conventional tethered implants to help minimize stress and inflammation in free-moving animals during brain studies. Not to mention, it also improves the lifetime of the device.

However, these wireless brain implants require intermittent surgeries or special wireless power setups that limit experimental options and animals' scalability that can be used in experiments.

On the other hand, Professor Jeong said that their new device eliminates those problems and allow seamless chronic neuromodulation.

"We believe that the same basic technology can be applied to various types of implants, including deep brain stimulators, and cardiac and gastric pacemakers, to reduce the burden on patients for long-term use within the body," said Professor Jeong.

How Does Wireless Charging Technology Work?

The researchers developed a tiny circuit that combines the wireless energy harvester with a coil antenna and a Bluetooth low-energy-microchip to allow for wireless charging. Then an alternating magnetic field can charge the battery inside the brain. The researchers noted that this harmlessly penetrates the tissue when charging.

According to the lead author, Choong Yeon Kim, the device can be controlled anywhere and anytime to manipulate the circuits. That means the device is a highly versatile tool that can help in investigating brain functions.

The neuroscientists injected narcotics in the rats, tested the wireless rechargeable brain implants in rates, and demonstrated their ability to suppress cocaine-induced behavior.

The Engineer website reported that the smartphone could suppress the behavior using precise light stimulation of relevant target neurons in the brain. Researchers noted that the brain implant's battery could be repeatedly recharged while the rats are freely moving, minimizing any physical interruption to the brain studies.

The researchers believe that this new version of their therapeutic wireless rechargeable brain implant could open new paths to novel opportunities in brain studies and therapeutic intervention that treats various brain diseases and other organs.

RELATED STORY: Lego-like Therapeutic Brain Implants That Can Be Controlled by a Smartphone