Recent data that shows that two vaccines against COVID-19 have lesser efficacy in South Africa compared to other places they were examined. This have intensified fears that COVID-19 is quickly looking for ways to escape the most powerful tools of the world to contain it.

According to an SFGATE report, American firm Novavax reported this week that even though its vaccine was almost 90-percent effective in clinical tests performed in Britain, the number dropped to 49 percent in South Africa. They said that nearly all the infections from the country "involved the B.1.351 variant."

Incidentally, on Friday, Johnson & Johnson announced its new COVID-19 vaccine was 72-percent effective against the prevention of moderate or severe disease in the United States, compared with Latin America at 66 percent and South Africa at 57 percent.

Laboratory tests had proposed that the vaccines authorized in the US, one from Pfizer and BioNTech, and the other from Moderna and the National Institutes of Health, stimulated a smaller immune response to the South Africa strain. 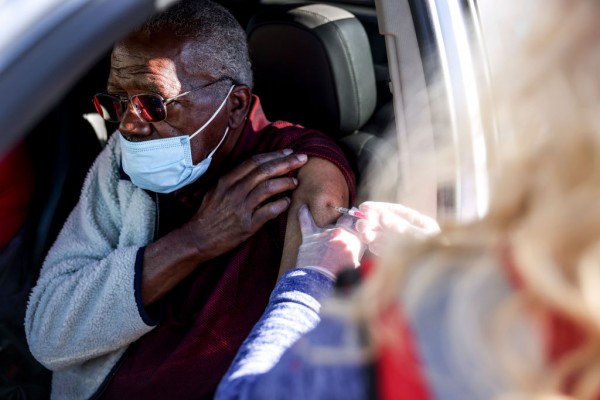 (Photo : Michael Ciaglo/Getty Images)
Fred Paskins receives a dose of the Pfizer-BioNTech vaccine at a mass COVID-19 vaccination event on January 30, 2021 in Denver, Colorado. UCHealth, Colorado's largest healthcare provider, plans to vaccinate 10,000 seniors over 70 during the drive-up event this weekend.

At present, there is evidence from tests in individuals that some strains are less vulnerable to specific vaccines. Harvard epidemiologist Dr. Michael Mina said, "From an evolutionary biology perspective, this is totally expected and anticipated." However, he added, it "never feels good to be validated on something so scary."

Before, researchers believed it would take a couple of months more, or even years, for the infection to develop resistance to vaccines. They claimed the rapid evolution is greatly an outcome of unchecked transmission of the virus.

Over 100 million people have been infected by the virus globally, and each of these contagions is an opportunity for the virus to mutate randomly.

A mutation that takes place to give the virus an advantage, the ability to reject the natural defenses of the body, for instance, can turn out to be the foundation for a heartier strain.

One early indication that this process was happening was the substantial number of people who were getting infected with COVID-19 a second time.

Apparently, the training the infected people's immune systems received when they first got infected was failing to shield them from new versions of the infection.

Worried scientists of Moderna and Pfizer-BioNTech now say that a similar thing could occur with immunity, which their vaccines induce.

In laboratories, the experts took several versions of the virus and had them exposed to blood samples from a small number of people who had been given the vaccines.

The neutralizing antibodies produced in reaction to the vaccine of Moderna were said to be equally effective against the original COVID-19 infection and the B.1.1.7 strain that occurred in the United Kingdom.

Experts had warned that lab tests were an imperfect model in terms of understanding the resistant response in people.

The said report specified that the results Johnson & Johnson released gave further evidence that the problem was serious.

Scientists explained, the weaker vaccine efficacy in South Africa, where it was tried on roughly 6,500 people, nearly certainly was an outcome of the prevalence of the strain spreading widely there.

Researchers believe it is more infectious compared to other variants and that it has turned out to be more common in South Africa and somewhere else since the trial started in September.

In addition, they said, variants were likely to blame, too, for the subpar showing of the vaccine of Johnson & Johnson in Latin America, where it was tried in over 17,000 people in Chile, Brazil, Peru, Mexico, Argentina, and Columbia.