By tracing how a gene variant that makes people more vulnerable to tuberculosis evolved, researchers have been able to follow the rise and fall of the disease over the past 10,000 years.

According to Science, the scientists have also presented how TB reshaped people's immune systems, specifically those who lived in Iron Age Europe.

Author Lluis Qiuntana-Murci, a population geneticist at the Pasteur Institute and College of France said, we are all the descendants of survivors of the past epidemics.

The study author added their paper entitled "Human ancient DNA analyses reveal the high burden of tuberculosis in Europeans over the last 2,000 years" helps determine which actual pathogens "have changed our DNA and made us more resilient."

The mere mention of the worst plagues on Earth include Spanish Flu, bubonic plague or Black Death and now, COVID-19. 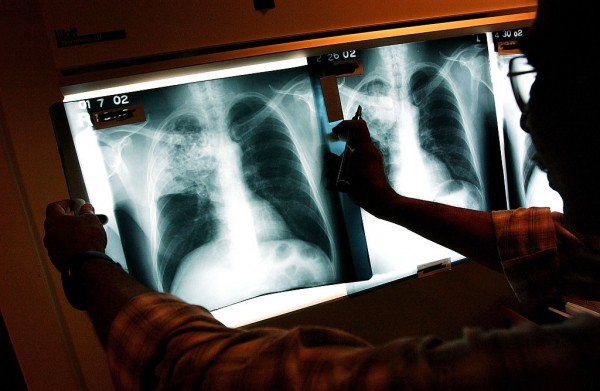 (Photo : Spencer Platt/Getty Images)
A doctor examines the x-rays of a tuberculosis patient at a TB clinic in 2002 in Brooklyn, New York. Healthcare workers around the country oversee patients in a program called Directly Observed Therapy that ensures carriers of the tuberculosis bacteria take their medication.

The said pandemics have claimed millions of lives, although their toll pales if compared with that of TB, which has been the cause of death of one billion people for the past 2,000 years.

A 2019 Daily Post report said that the World Health Organization revealed that in 2018, 1.5 million people died from complications from TB globally.

This disease's earliest evidence came from skeletons in the Middle East buried about 9,000 years ago, right after agriculture's invention.

However, Mycobacterium tuberculosis, the variant that emerged 2,000 years back, still kills people today.

Earlier on, USA TODAY came out with a report comparing TB and COVID-19 to show if the former is more dangerous than the latter.

The two diseases, the report specified, may both be respiratory infections although there are differences. Bacteria cause TB while a virus genetically associated with severe acute respiratory syndrome coronavirus or SARS-CoV causes COVID-19.

Both are transmitted through close physical contact. When a TB-infected individual is coughing, the said report specified, Mycobacterium tuberculosis can stay suspended longer in the air until someone else inhales it, typically in an enclosed area.

According to TB Surveillance and Epidemiology director Dr. Shama Ahuja from the New York City Department of Health and Mental Hygiene, TB spreads typically in hours.

Meanwhile, for COVID-19, the director elaborated, it is a virus with such a short interaction, resulting in the spread of the infection.

Furthermore, the immune response of the body to the pathogens is also different. Boston University School of Medicine's infectious disease specialist Dr. Pranay Sinha said that TB is basically putting a small 'bunker' inside the lung and stays there until an individual has a weakness in his immune system.

In the study, the gene variant's evolution that's making people susceptible to TB, the researchers discovered that the P1104A mutation was really old or ancient.

It was spotted in the DNA collected from a farmer who lived in Anatolia, now Turkey more than 8,000 years ago. The researchers estimated that the mutation took place at least 30,000 years ago.

In their research, the authors indicated that Anatolian farmers, as well as Yamnaya herders transmitted this gene variant as they moved to Central Europe.

By examining changes in how often the variant arose over time, the study investigators approximated that roughly three percent of the population carried the gene until roughly 5,000 years back.

Check out more news and information on Tuberculosis on Science Times.