Male frogs way of wooing female frogs is through making loud noises, even though that means their song could no longer be distinguished from one another.

But female frogs have their own mechanism of blocking out irrelevant sounds that comes in handy during mating season when picking out a mate of the same species is challenging with all the males' noise.

The findings are presented in the study entitled "Lung Mediated Auditory Contrast Enhancement Improves the Signal-to-Noise Ratio for Communication in Frogs," published in the journal Current Biology. 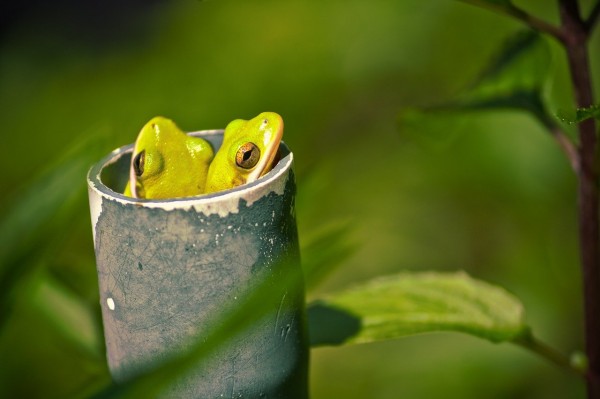 Using the Lungs to Block Out Unwanted, Noisy Male Frogs

Researchers found that female frogs could determine which among the noisy male frogs are of the same species and their potential mate by using their set of lungs.

When they inflate their lungs, it reduces the sensitivity of their eardrum's response to noise, especially those encountered in the cacophonous breeding chorus of various species of male frogs during mating season, to make it easier for them to hear the calls of their mates, according to study lead author Norman Lee of St. Olaf College in Minnesota.

The researchers said that this mechanism is called the "spectral contrast enhancement" EurekAlert! reported. This makes the frequencies of a male frog's call stand out among the noise created by other frogs.

Study senior author Mark Bee of the University of Minnesota-Twin Cities said that this is analogous to the signal-processing algorithms for special contrast enhancement used in hearing aids and cochlear implants to boost and filter out the frequencies present in speech sounds.

How Do Female Frogs Do It?

According to Smithsonian Magazine, most frogs have their eardrums on their skins' surface that combative frogs sometimes exploit to try damaging a rival's eardrum when fighting.

Also, their eardrums are internally connected, and their lungs. The glottis and the Eustachian tubes inside the mouths of the frog allow sound to pass through the animal and reach the eardrums both from the inside and outside.

Previous research suggested that female frogs hear the males by directional hearing, a phenomenon wherein females zero in on the mating calls of what they wanted to hear. However, using laser doppler vibrometry, the researchers found that is not the case.

According to Courthouse News Service, the team believes that the lungs of the female frogs function similarly to the microphones in noise-canceling headphones. Their inflated lungs capture sounds in the desired frequency range then feed them to the glottis and the Eustachian tubes to interact with the external noise.

"So, the inflated lungs are attenuating that extraneous noise, which reduces the likelihood that the neurons will respond to the wrong thing," Bee said.

According to Smithsonian Magazine, the researchers do not see new frog-inspired technological breakthroughs coming out soon despite the frogs' mechanisms potential use in the field of technology.

Bee added that it is amazing to think that noise cancellation was first used by amphibian evolution over 200 million years ago.

Check out more news and information on Frog in Science Times.

Dark Energy Detected? Unexplained Finding Shows This Comprise 68% of the Universe While 27% Is Dark Matter