A groundbreaking concept proposes driverless air taxis lifting tourists to restaurants situated 100 feet off the ground - giving an unprecedented experience and view of the Italian wilderness around.

Chinese unmanned aircraft company EHang Holdings are working with architects from the Rome, Italy-based Giancarlo Zema Design Group to turn this lofty vision into a reality. The 100-foot towers - dubbed "Vertiports" by the proponents - are designed to receive the driverless air taxis landing vertically on each roof.

Tourists who will go on the experience will be automatically carried to the raised restaurants. After the dining experience with a panoramic view of the Italian forests, tourists will be ushered by their self-driving vehicles in an equally scenic ride back to their nearby accommodations. 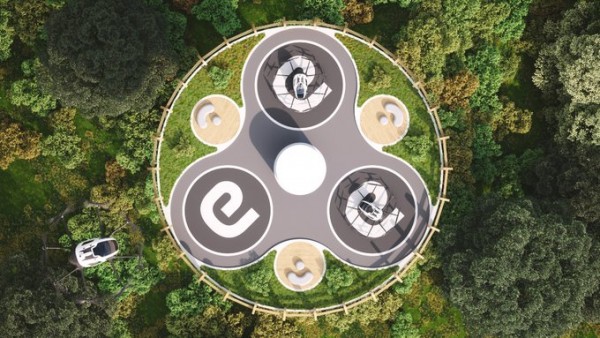 The designers also revealed in a press release that the unique design of these vertiports - a sturdy rising base that expands to a circular top - has been inspired by the Baobab tree, long-lived deciduous trees mostly native to Africa, Madagascar, and Australia. These vertiports will be mainly constructed from a combination of steel and laminated wood.

Additionally, each tower will have its own café and waiting area in addition to a 200 square meter (2,153 square foot) restaurant that is also accessible through an elevator running at the center of the structure.

The eco-towers are supposedly powered by non-slip solar panels capable of generating 300 kilowatts of power every day fitted directly on their roofs, which also doubles as a terrace and the landing port for driverless air taxis. These solar panels would also serve as the power source for charging the driverless air taxis - formally designated as EH216 passenger autonomous aerial vehicles. It is visually similar to commercial drones - enlarged to accommodate passengers and is lifted by eight dual rotors surrounding the cockpit area.

Also, unlike conventional helicopters - these do not require pilots to navigate to and fro. Instead, these passenger-sized drones automatically travel through a point-to-point direct flight system that makes them safer and more efficient.

However, the exact location of these futuristic tourist spots remains undisclosed. The developers have also announced that they are looking to implement similar concepts in various locations across Europe and Southeast Asia.

EHang Holdings is among the world's leaders in autonomous aerial vehicle (AAV) technology. Headquartered in Huangpu, Shanghai in China, the tech provider offers AAV products and commercial solutions for air mobility such as passenger transport and logistics, smart city design and management, and aerial media solutions. It has also recently announced its support for the Chinese National Transportation Network Plan, which outlines the development of a comprehensive transportation network by 2035 across the mainland - looking into the potential of smart mobility solutions to drive a smarter, more efficient transportation system.

On the other hand, the Giancarlo Zema Design Group is an innovative architecture practice in Rome, specializing in smart and eco-sustainable projects, semi-submerged structures, floating habitats, and more. Using advanced technologies and design software, the architectural firm provides its clients with all then necessary information before implementation.

RELATED ARTICLE: Flying Cars May Be Commercialized by 2050

Check out more news and information on Flying Cars in Science Times.