Researchers Manipulate Antimatter With Laser for the First Time

For the first time, scientists from the ALPHA collaboration at CERN reported successfully manipulating antimatter with the use of a laser system - potentially changing antimatter research and guide future experiments on the field.

Antimatter basically refers to the opposite of matter. Specifically, antimatter has sub-atomic particles whose properties (such as electric charge) are the opposite of normal matter. Most of the challenges surrounding the detection and observation of antimatter come from the fact that it immediately "annihilates" when it comes into contact with normal matter.

The ALPHA collaboration scientists report their findings in the article "Laser cooling of antihydrogen atoms," appearing in the latest journal Nature, March 31. 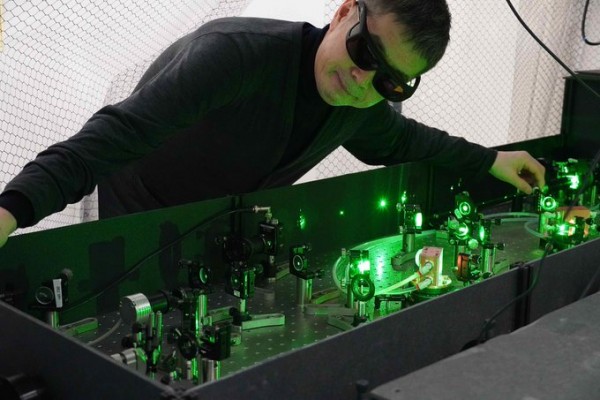 To achieve the breakthrough, researchers used a laser system made in Canada and cooled down the antimatter sample down to temperatures close to absolute zero - or almost 0 Kelvins or -273.15 degrees Celsius.

"Today's results are the culmination of a years-long program of research and engineering, conducted at UBC but supported by partners from across the country, said Takamasa Momose, a member of the ALPHA collaboration's Canadian team (ALPHA-CANADA) at CERN from the University of British Columbia (UBC) who helped develop the laser, in a news article from UBC.

He adds that the new antimatter could help solve long-standing questions about the particles like how does antimatter respond to gravity or whether it can offer new insights about symmetry in Physics.

Since it was first tested four decades ago, the use of lasers for cooling basic atoms has changed mankind's understanding of physics, leading to some Nobel-winning experiments. The use of the Canada-made laser system, however, marks the first use of laser for cooling antimatter.

In the first-ever laser cooling of antimatter, researchers used antihydrogen samples. Antihydrogen is an atom made of an antiproton (opposite of proton) and a positron (also known as antielectron). The magnetically trapped antimatter is cooled using a Lyman alpha (Lyman-α) laser, emitted as narrow-linewidth pulses to excite the 1S-2P transition in the antimatter atom.

Researchers noted that while the laser only hits the sample in one direction, the magnetic trap couples the motions of the antimatter - both in longitude and transverse - leading to a complete, three-dimensional cooling of the sample.

By cooling down antimatter samples, researchers could further investigate the nature and behavior of these particles which, in turn, could shed light on the fundamental laws that govern the Universe. One of the persisting problems in physics and cosmology is the so-called Baryon Asymmetry problem, which pertains to the observed imbalance between matter and antimatter in the observable universe.

It was a bit of crazy dream to manipulate antimatter with laser," shares ALPHA-CANADA spokesperson, TRIUMF researcher, and the original proponent of the test concept Makoto Fujiwara.

Both Momose and Fujiwara are now spearheading another Canadian-led project, the Hydrogen Antihydrogen Infrastructure at Canadian Universities (HAICU), which aims to develop new quantum techniques for further antimatter studies. Fujiwara shares of his next "dream" of making a "fountain" of antimatter atoms by ejecting laser-cooled samples into free space, which could open new avenues for quantum experiments previously thought impossible.

Check out more news and information on Antimatter in Science Times.