Robots have been developed with various senses, often depending on their intended application - from vision, touch, and even smell and taste. Now, a team led by MIT is trying "to give robots superhuman perception" with a new design.

Presenting their study at the upcoming IEEE International Conference on Robotics this May, the team from the Massachusetts Institute of Technology (MIT) designed a robot that uses radio frequency waves that penetrate obstacles such as walls to "sense" what lies behind them. Called the "RF-Grasp," the new robot combines the radio frequency sensing capabilities with the traditional machine vision to locate, identify, and grasp items that might even be hidden from view. 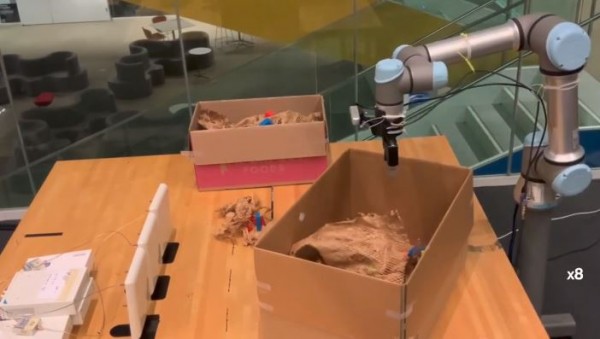 Radio frequency (RF) has been used in a variety of applications - one of the most common is in tracking things from clothes to books to pets. RF identification systems usually have two parts: an RFID tag and a reader. The RFID tag is usually a small integrated circuit (IC) embedded, or sometimes implanted, into the items that need tracking. This emits a radio frequency signal that is modulated before being reflected in the reader.

The signal sent back to the reader usually provides the location and additional information - such as those of the target item - to the users. This technology has found wide usage in supply chains, with Japan looking to use radio frequency tracking for almost all of its retail purchases in the near future.

On the other hand, in the e-commerce industry, most warehouse tasks are still completed by humans despite hazardous conditions. Up until now, robots have had difficulty locating and grasping specific objects in such crowded environments. In the MIT news release, Rodriguez notes that "perception and picking are two roadblocks in the industry today." With existing machine vision technologies that rely on optical input, objects blocked by walls or other items will not be detected and picked up.

Researchers say that this advance in robotics could streamline e-commerce requirements in warehouses in the future or allow robots to pick the tools they need in a mix of different items in a box.

With the RF Grasp robot, objects can be located with a mix of a camera and an RF reader, allowing detection even when the target is blocked from the camera view. The robot is fitted with a grasping hand at the end of an arm, with the camera installed on the robot's wrist. On the other hand, the RF reader works independently, sending information about the location of the target RFID tag to the control algorithm, helping the robot navigate toward its target. Basically, RF Grasp uses both the visual input from the camera and the radio frequency tracking from the reader.