Archaeologists have uncovered more than 40 tombs in the lle-Rousse commune on the French-controlled Mediterranean island of Corsica that dates back to the mid-first millennium AD. These remains were buried in an ancient necropolis of Corsica that is situated behind the town's parish church. The discoveries of the Corsica necropolis were made as part of preparations for an upcoming construction project.

The French team from the National Institute of Preventive Archaeological Research (INRAP) was dispatched to the small village to explore evidence of past human activity in areas that will be left inaccessible in the very near future.

Previous archaeological findings in lle-Rousse have been scarce, so this project did not invite a lot of interest. However, as the archaeologists uncovered the Corsica metropolis, they expect to unearth more from the site than they initially expected.

INRAP's initial surveys in 2019 found proof of about a dozen burials. The most recent diggings that began last February zeroed in on two specific sections of land, where they successfully discovered the tombs.

When the excavation of the individual tombs went on, archaeologists found out remarkable facts about the ancient burial practices in ancient necropolis. Instead of being interred in coffins, most of the skeletons recovered were entombed in a tall, durable ceramic jar called an amorphae.

These jars were used as containers of liquid-based and dry consumer goods and to store imported products from Carthage (modern-day Tunisia) between the fourth and seventh centuries AD. Among those purchased goods were olive oil and brine and were sold in large quantities. This meant there had been a great number of amphorae that were to be repurposed as final resting places for the dead. 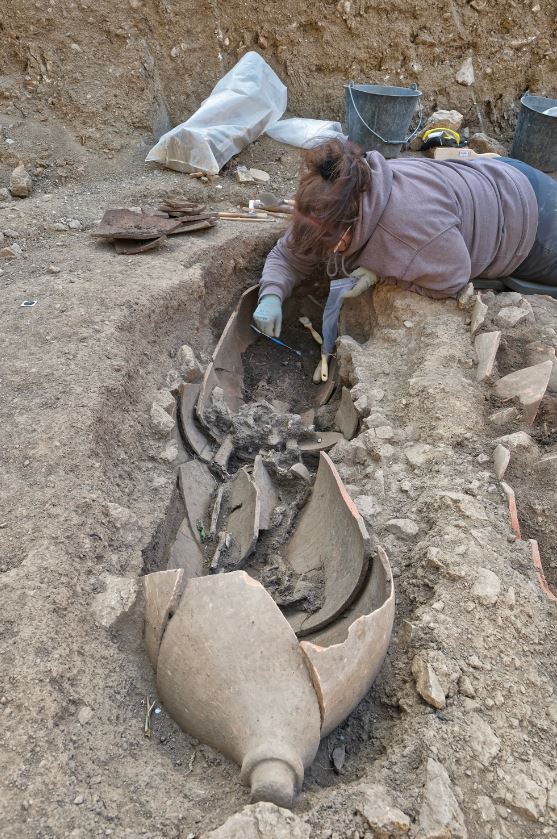 Remarkably, some of the rock tombs were covered or strengthened by terracotta materials that are quite recognizable as repurposed tegulae and imbrices, which are roof tiling linked to Greek and Roman architecture.

The Romans did rule the island of Corsica and the lle-Rousse area during the time the burials were dated. But later, settlers could have reused materials that were left behind at the end of the Roman occupation. As such, it would be premature to identify Corsica as Roman, although that may likely be an alternative.

Situated at Corsica's northwestern coast, lle-Rousse was established in the 18th century AD as an independent port. It has been largely identified as a sleepy fishing village, although when tourists started to trickle in, such tourism became an increasing source of income for the village.

The area in and around lle-Rousse has been inhabited for at least 6,000 years. Its prime coastal location makes it an ideal port for ships passing through the Mediterranean, and this led to the settlement of diverse peoples. Lle-Rousse was named Agilla in ancient times and was an attractive location for various powers wanting to seize control over the sea lanes.

In the third century B.C., Corsica and Agilla had fallen under the rule of the Carthaginians. But in 240 BC, the Romans defeated the Carthaginians, thus making the island under full Roman control until Visigoths conquered the island in 410 A.D. They renamed the village Rubico Rosega.

While Agilla/Rubico Rosega was not fully occupied, security had been in constant threat. This includes possible invasion or the ravages of Mediterranean pirates, which prevented the growth of commercial activity in the area. By the mid-first millennium, farmers and fishermen inhabited the thriving community.

Corsican political, social, and economic conditions were flourishing at the time of the burials. The rule passed from the Romans to the Visigoths to the Vandals to the Ostrogoths and back to the Romans, who came back to conquer the island under the Eastern Roman Empire in 536 AD.

How all of this affected the village of IIe-Rousse (Agilla/Rubico Rosega), annexed by France in the 18th century, has always been shrouded in mystery. While the area was believed to be deserted, the unearthing of the populated Corsica necropolis shows that the population density around the mid-first millennium was certainly more massive than expected.

The discovery should draw renewed archaeological interest in northwestern Corsica, with more ruins, artifacts, and ancient remains waiting to be unearthed.

Check out more news and information on Ancient Burial Practices and Mummies on Science Times.