Three Creatures Consuming Each Other: Cephalopod Eating a Crustacean Served as Treat to Ancient Shark

A fossil was discovered with the remains of three different creatures consuming each other. Dating back to the early Jurassic period, the fossil unearthed includes a cephalopod, a crustacean, and an unidentified beast which is assumed to be a shark.

It abandoned the now fossilized couple due to the crustacean's meat that is too squishy. But, even though experts are still uncertain about the hunter's identity, it definitely left a good chuck after millennia.

Evidence suggests that the unknown, hungry predator caught the happy squid-like animal belemnite while eating a hooked crustacean mid-meal. After the attack, the cephalopod its prey sank to the seafloor. Then, after millions of years, the two were fossilized together just to be found as one hilariously epic specimen at one of Germany's quarry, Science Alert reports. 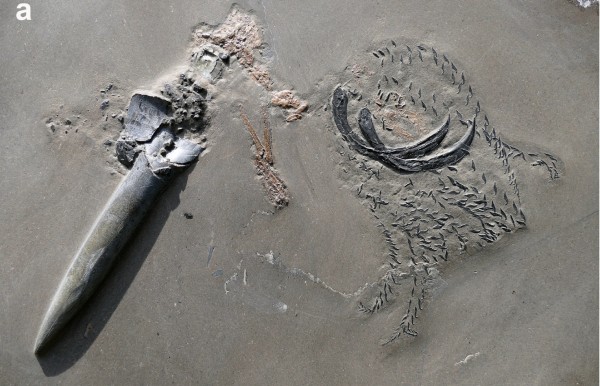 The remnants of almost 200 million years old creatures, however, is more than just entertainment. Based on the study entitled "Fossilized leftover falls as sources of palaeoecological data: a 'pabulite' comprising a crustacean, a belemnite and a vertebrate from the Early Jurassic Posidonia Shale," the remarkable fossil provided compelling data that further proves some of the theories surrounding the species.

According to the University of Zurich's Paleontology Museum curator and Paleontology Institute professor Christian Klug, the specimen of the belemnites are incredibly unique due to their soft tissue, which is pretty rare for the two-finned, ten-armed creature, Live Science reports.

Who Left the Meal?

A fascinating fact about the mysterious predator is that it was first thought to be an ichthyosaur, a possible contender of the largest animals that ever lived. However, it left the supposed supper because the cephalopod's beak is hard to digest due to its hardness and pointy feature. However, ichthyosaur is eliminated because it doesn't consume and has no skill to decapitate the belemnite's tough beaks.

Hybodus hauffianus, an ancestor of modern-day sharks, is the best guess for taking the unknown predator's identity. This is supported by evidence from many of Jurassic shark's fossilized bellies full of undigested belemnite. But it isn't confirmed yet if these sharks are really the subjects in question as they probably died due to munching a lot of beaks, which the creatures must be familiar with, considering they are found in the same area.

The study suggests that because of the experience from belemnites, the Jurassic sharks like the hybodus, saurorhynchus, pachycormus, and possibly ancient crocs like steneosaurus evolved and learned how to properly consume the squid-like creature and leaving the beak to avoid the hazard. This is evident through the belemnites fossil, with the soft parts on its middle area removed but the rostrum and arms still intact.

Aside from the identity, there is still no evidence on why the squid-like creature was bitten and left for dead by the hunter while it was still eating. Klug said that predators tend to enjoy their meal while consuming it, lowering their guard from their surroundings and unintentionally inviting possible attacks. This is just a guess and not credible proof for the death of the cephalopod, he added.